Before I interviewed Nintendo President Tatsumi Kimishima for our TIME profile piece last week, I spoke with Nintendo of America President and Chief Operating Officer Reggie Fils-Aimé. We touched on several areas, including his thoughts on Nintendo surrendering control of the hardware aspect of game design (for its upcoming mobile games) as well as why Club Nintendo had to be shuttered (in September) long before My Nintendo arrives next year.

“Unfortunately there’s a simplistic mentality out there, that ‘Make a Mario game for smart devices’ is a recipe for printing money,” says Fils-Aimé when I ask about the mindset that presumes Nintendo on mobile is going to crack open Fort Knox. “And it’s not. It just simply is not. It’s that Kyoto craftsmanship mentality that says whatever we’re going to do, it needs to be a wonderful experience for consumers.”

“We know that Mario and his ability to run and jump, to transform based on different items, that’s been optimized for a play-control approach that doesn’t exist for smartphones. And so for us, it’s not simply taking existing games and porting them over to smart devices as the answer. Our answer is to create new compelling experiences that leverage what smart devices do best.”

And the new mobile experiences “may feel different”

Nintendo has long prided itself on its holistic approach to game design, meaning it controls both the hardware and software elements. Putting Nintendo software on non-Nintendo hardware like smartphones and tablets thus seems a significant departure from norm. When I asked Fils-Aimé how the company was able to square the apparent disparity, he told me he couldn’t pretend to know Nintendo’s full thinking on the matter, then said this:

“Hardware and software development inside Nintendo has always operated hand-in-hand. It’s a constant back-and-forth of ideation and real world solutions. Maybe the clearest example would be Wii Sports on Wii—we couldn’t employ a motion control game until there was technology that would support it. So we made that hardware ourselves.”

“But that said, there are always limitations, because some things just aren’t possible. We might brainstorm a game where a player actually levitates above the floor in his family room . . . but we haven’t figured that out—at least not yet! And similarly, sometimes new technology becomes an added tool for game developers, but that doesn’t immediately generate the ‘killer app’ that everyone hopes for. As I said, whether it’s technology or imagination, there are always limits.”

“In this way, what I would say in terms of our mobile apps is that we will absolutely continue our traditional maxim of developing software that matches the hardware. We have looked at the limitations of software design on mobile platforms, and worked within those parameters. If there’s a 3DS game that requires the full manipulation of joysticks and multiple buttons, that game clearly can’t be exactly replicated on a touch-screen mobile device. Our strategy is not to port games developed for our dedicated systems to smart devices as they are–we have to develop new software experiences that give people the opportunity to interact with Nintendo IP and that matches the play style and control of smart devices.”

“So what we’ve been working at is development of apps that feature Nintendo IP in a meaningful way for mobile platforms. We understand that this may feel different. And that’s O.K. Doing things differently isn’t something we shy away from. And we’re confident we can deliver ‘surprise and delight’ within the profile of mobile devices just as well as we do with dedicated portables or home consoles.”

And that, says Fils-Aimé, is why Nintendo’s first smartphone app, Miitomo, “makes so much sense”

“At its heart, people are using [smart devices] as a way to stay connected with others through a variety of different means. We think we can provide an experience that’s differentiated in the marketplace, and it leverages what the device does well. And certainly we will bring our best IP into the smart device world, but we’re going to do it in a way that leverages what those devices do, that enable a play style that makes sense. That’s what critically important to us.”

Club Nintendo had to bow out early, because My Nintendo is a total rethink

“Club Nintendo as a program really at its heart rewarded existing players and rewarded them initially with physical goods, and later on here in the Americas with digital goods, digital content, full games that we made available to consumers that they used their Play Nintendo coins to get access to,” he says. “What’s different with My Nintendo, is that My Nintendo is meant to be the virtual hub for all of your consumer interactions with Nintendo IP.”

“Meaning playing a smart device app from Nintendo, it recognizes that you’ve done that and you’ll be rewarded for that activity. Purchase games for our dedicated game systems, My Nintendo will know, you’ll be rewarded for that activity. Play games, watch videos, conceptually go to Universal Studios, the thought process is that this is a more robust and sticky way for you as a consumer to interact with all things Nintendo, for it to be tracked, and then for you to be rewarded for all that activity. Given that much larger vision, the mechanics of the program needed to be completely rethought and redone. And that’s why we sunsetted Club Nintendo to create this new program.”

“[My Nintendo] is tremendously ambitious. It is something where we’re trying to take a very complicated concept and simplify it as much as we can. But that’s why we had to make the transition from one program into something that’s very different in execution.”

Amiibo is a glimpse of Nintendo’s future

“From a North American perspective, we’ve sold 9 million Amiibo,” says Fils-Aimé in response to a question about the company’s recent financial upturn. “It’s a huge number. And I dwell on Amiibo because in many ways it’s reflective of where Nintendo’s going in the future. Leveraging our IP, leveraging our IP in a variety of different ways, whether it’s to drive our dedicated games business, whether it’s to drive our smartphone initiatives, whether it’s to leverage our partnerships with other companies like Universal Studios in creating unique attractions.”

“We are going to leverage our IP to make people smile and to have these differentiated experiences that will drive our profitability. So those are the things that drove the performance, and certainly as we look to the future it provides a bit of a playbook of where we’re going from here.” 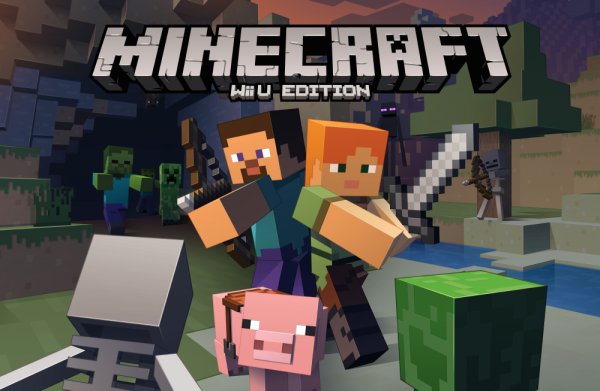 Minecraft Is Finally Coming to the Wii U
Next Up: Editor's Pick