Americans brought home 28 medals from the 2014 Winter Olympics in Sochi, but animal rescuers from U.S. couldn’t help bringing home a bundle of four-legged friends, too.

Ten dogs rescued from the streets landed safely in the U.S. on Thursday, Humane Society International said. The dogs landed at Dulles Airport and were brought to Washington D.C., where Washington Animal Rescue League is coordinating their adoption. The dogs are expected to be ready for adoption within weeks. Animal rights activists sprung into action earlier this year after widespread reports that Russian authorities were killing stray dogs before the Winter Olympics got underway.

“We are excited to make the connection for homeless Sochi dogs with loving homes in the United States, with our focus on helping street dogs in Russia and around the world,” Kelly O’Meara of the Humane Society said in a statement. “Our goal is to protect street dogs from cruel and unnecessary killing programs—like the one employed by Sochi officials to ‘clean up’ in advance of the Olympics—by working with governments to create humane and effective dog population management programs.”

“They’re the sweetest, most interactive, very friendly dogs, very adoptable that just happen to be unfortunate enough to be living on the street,” O’Meara told CNN of the dogs up for adoption.

Humane Society International, in partnership with animal rescue organizations in Sochi, led the effort to take in wandering mutts during the Games. American skier and Olympic silver medalist Gus Kenworthy also adopted four dogs during the games, bringing more attention to the doomed fate of many pups on the streets of Sochi. More dogs are expected to arrive from Russia in the coming weeks. 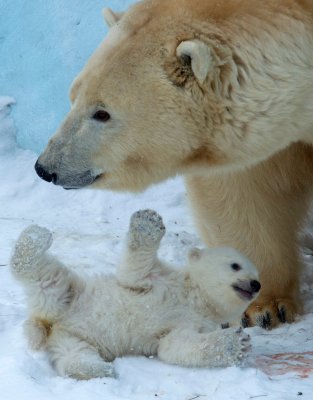 Girls' Day Out: Polar Bears Do Some Adorable Mother-Daughter Bonding
Next Up: Editor's Pick