The year that TIME first chose a woman to fill the Man of the Year slot, the woman in question was so controversial that the legendary feminist Carrie Chapman Catt stopped issuing her own annual “Women of the Year” list in order to avoid having to include her. That anecdote was all the more reason for TIME’s editors to give the title for 1936 to the woman in question: Wallis Warfield Simpson, the divorcée for whom King Edward VIII had given up the British throne.

Queen Elizabeth II was the next individual woman to be given the title, and the third came precisely a half-century after the first, when Corazon Aquino, President of the Philippines, was named Woman of the Year for 1986. Today, a fourth woman, German Chancellor Angela Merkel, joins that elite club. (Over the years, a number of other women have been given the title as part of a group.)

In some ways, Aquino (who died in 2009) and Merkel could not be more different. Merkel trained as a physical chemist before making a slow and steady rise through the political ranks, relying on her stolid reputation to see her through a decade in the Chancellor’s office. Aquino, who was married to a Senator and critic of Ferdinand Marcos, put “housewife” as her occupation on the forms she needed to complete to file her candidacy for president. She had no political experience before her victory.

The pair do share one very particular element of leadership. Aquino was known as the “Mother of the Nation” during her rise to power. Merkel, meanwhile, has taken on a very similar moniker. “The Chancellor has acquired several nicknames: ‘Merkiavelli’ and ‘the Black Widow,’ for her ability to sidle up unnoticed before delivering a deadly bite,” TIME noted when she was running for a third term in 2013. “To her supporters, she’s Angie. But everyone in Germany knows her as ‘Mutti,’ mommy.”

Even as Aquino ruled her nation, she was seen through her roles as wife and mother. She was the widow of a popular politician, and would later be the mother of a president, but she did not appear to crave power of her own.

In Merkel’s case, however, there is little retro or stereotypically maternal about her Mutti-ness—and not just because she has no children of her own, and a husband who stays away from the political press. There’s a certain tongue-in-cheek quality to the nickname, but it’s not mocking. After all, her own party has used it to her advantage. Her influence is due to her actions and not her sex. Merkel has managed to isolate the most powerful elements of the maternal—protection, reliability, care, attention, knowledge—and leave behind worn stereotypes of old.

Read the full 1986 Person of the Year cover story, here in the TIME Vault: Cory 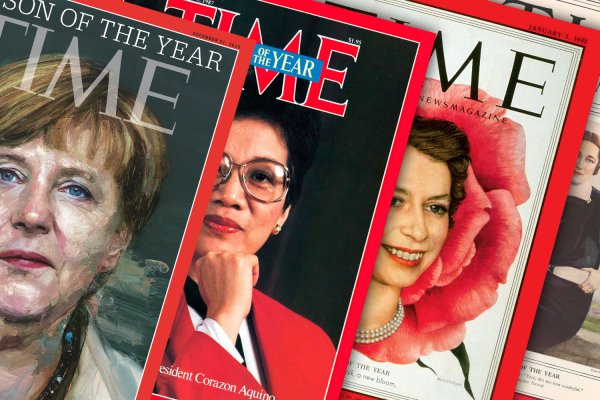 The First Female Person of the Year in Almost 3 Decades
Next Up: Editor's Pick