Hillary Clinton on Tuesday condemned Donald Trump’s call to bar Muslims from entering the United States, calling his proposal “shameful” and “dangerous” in a damning statement.

“Donald Trump has made a name for himself in this election by trafficking in prejudice and paranoia,” Clinton wrote in a post on her website. “At a time when America should be doing everything we can to fight radical jihadists, Mr. Trump is supplying them with new propaganda. He’s playing right into their hands.”

Trump on Monday said that in response to the terrorist attacks in San Bernardino and Paris, the federal government should stop Muslims from entering the United States, a measure that has been widely lambasted as bigoted and unconstitutional. The billionaire real estate mogul and Republican presidential candidate is feeding off of anger among many working class whites, who have called for stricter immigration controls.

Clinton, however, said that Trump’s statement is a reflection of much of the rest of his party, saying that “many GOP candidates have also said extreme things about Muslims. Their language may be more veiled than Mr. Trump’s, but their ideas aren’t so different.”

Former Florida Gov. Jeb Bush suggested only Christian refugees from Syria should be allowed asylum in the United States, and Florida Sen. Marco Rubio has called the war with radical Islam a “clash of civilizations.” Democrats have argued their rhetoric is not so far from Trump’s.

Clinton also addressed her note to Muslims: “What you’re hearing from Trump and other Republicans is absolutely, unequivocally wrong. It’s inconsistent with our values as a nation—a nation which you are helping to build. This is your country, too. I’m proud to be your fellow American. And many, many other Americans feel the same way.” 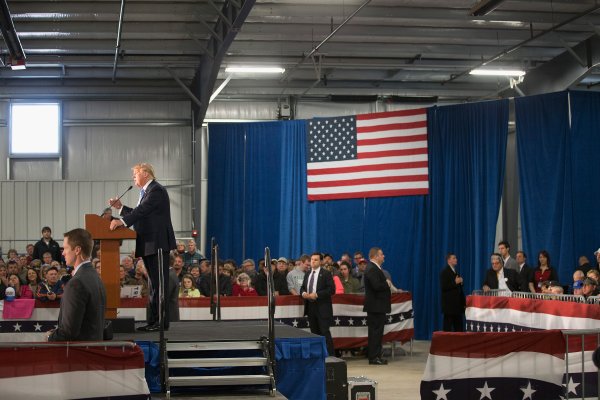