The Long History Behind Kim and Kanye's New Baby's Name

Kim Kardashian West and Kanye West announced on social media Monday that their second child’s name is Saint West. Though the choice isn’t wildly surprising coming from a couple whose first child is named North West, it’s still a bold move: According to Social Security Administration data, the name Saint has not cracked the 1,000 most popular American names for a baby boy for any year in the last century. In total, 32 babies were named Saint in 2014 and 22 in 2013.

Usually, of course, a name that begins with “Saint” means something very particular: that the person in question has been canonized. Lawrence Cunningham, a professor of theology at University of Notre Dame and the author of A Brief History of Saints, says the name Saint, as a proper name, is peculiar but meaningful. And, it turns out, as hard as it is to find modern babies named Saint, it’s even harder to pin down the history of religious sainthood.

“The word saint simply means one who is set aside or one who is chosen by God,” Cunningham says. “Even before Christianity became a tolerated religion in the Roman Empire in the early 4th century, certain people were designated as saints in a more particular sense as people who were outstanding models of the Christian faith.”

Cunningham says that the process by which people are named saints has changed over the course of history in the church, which is where canonization comes in. “It sounds horribly bureaucratic but it means the procedure by which someone is listed on the list, or canon, of people venerated publicly in the church,” he says.

It’s rumored, and widely debated, that the first officially canonized saint was Saint Ulrich of Augsburg, in the 10th century, but Cunningham says that there had been veneration of saints for as long as 700 years before the time of Saint Ulrich. Being named a saint goes all the back to the earliest centuries of Christianity. As for the word itself, it dates back to the early 12th century.

Saint West’s father Kanye is no stranger to religion. His 2013 album Yeezus came with a song called ‘I Am a God,’ which even inspired a group to form an official religion centered around him called Yeezianity, part of the ‘church of Yeezus.’

Asked if he thinks devout Christians will be offended by Baby Boy West’s new name, Cunningham said he couldn’t say because it would cause him to make a moral judgment on them. 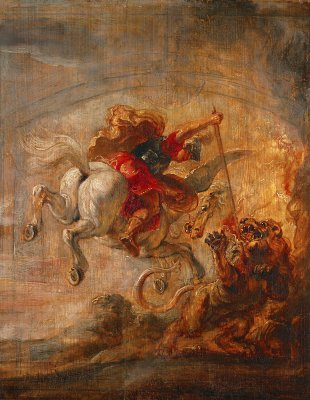 Modern Atheism Isn't Actually All That New
Next Up: Editor's Pick