Jar Jar Binks and Ewoks Won't Be in Star Wars: The Force Awakens

While the cast of Star Wars: The Force Awakens have remained tight-lipped about what fans can expect from the highly anticipated film, they were a little more forthcoming about what they shouldn’t expect to see.

“Jar Jar is definitely not in the movie,” producer Kathleen Kennedy revealed at the Star Wars press conference in Los Angeles on Sunday.

And don’t expect to see any cuddly, teddy-bear-like Endor natives walking around in the film, either – unless one happened to sneak onto the set, that is.

“No, there are no Ewoks in this film,” director J.J. Abrams also shared.

But Princess Leia herself, Carrie Fisher, was quick to point out that wasn’t beyond the Ewoks’ sneaky nature. “That you’re aware of,” she quipped.

“That’s right,” the director admitted. “There are rumors that some snuck onto set. But there are a lot of them in Return of the Jedi.”

Another thing fans shouldn’t expect from the film? A secret bonus Easter Egg scene at the end of the credits.

“All the scenes are actually in the movie,” Abrams confirmed.

Abrams also dished on the long process of choosing some of the newer characters’ names, admitting that some names stuck right away, while others went through a few changes.

“A lot of names came and went and some names stuck,” he explained. “I remember when we put down BB-8, it was a name that was the first and only name that droid had, but we called him BB-8 and we still do. Rey and Finn and Poe went through many iterations. Kylo Ren was Kylo Ren fairly early on and there was a backstory, and Maz Kanata I think was always Maz Kanata.”

But the most challenging aspect of creating new characters didn’t have anything to do with their names, but their appearance. Abrams said that the filmmakers would sometimes go through hundreds of options before finally settling on a character’s look.

“The most difficult one was Kylo Ren, and we went through, I don’t know, how many hundreds and probably thousands of iterations and different versions,” said Abrams.

But all the trial-and-error was not done in vain. The director also revealed that one costume made for Ren ended up on a different character entirely.

“Over the course of that, the costume for Captain Phasma was designed,” he explained. “[It] was actually pitched as a Kylo Ren costume originally. For story reasons, it didn’t make sense and didn’t work, but we suddenly realized, ‘Oh my God, this is one of the greatest-looking costumes I’ve ever seen.’ ”

And while the cast managed to dodge any questions that could lead them to reveal any secrets, they were more than happy to share their favorite rumor they’ve heard about the film’s plot.

“That Jar Jar is Kylo Ren,” said Isaac, adding, “I kind of wish that could be true.”

Boyega even admitted that a rumor about his character led him to meet his fake family tree.

“I remember reading this theory that Finn is Mace Windu’s grandson,” explained Boyega, name-checking Samuel L. Jackson’s character from the prequels. “And I was at a party, and someone behind me just tapped me on the shoulder and was just like, ‘Yo. Black Jedi!’ And I turned around and it’s Samuel L. Jackson!”

And while Boyega said he’s been a fan of Star Wars from a young age, he reveals that it was the actors behind the original characters who inspired him during his audition process. 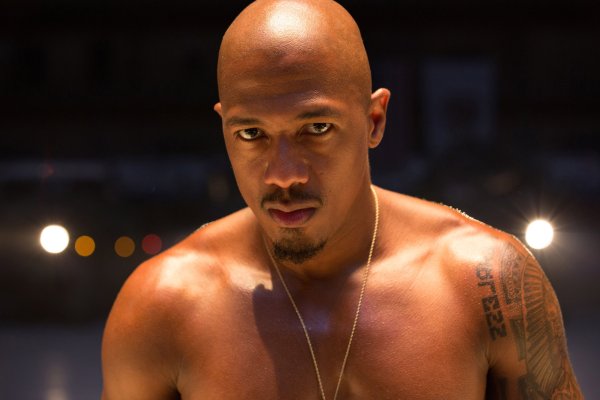 Chi-Raq Is a Shout of Joy and a Cry of Anguish
Next Up: Editor's Pick