Republican presidential candidate and retired neurosurgeon Ben Carson is planning a trip to Africa one month before the Iowa Caucuses, he announced Monday.

In an interview with conservative radio host Hugh Hewitt, Carson said he will travel to Nigeria, Kenya, and Zambia for a nearly one-week-long trip beginning December 27 to bolster is foreign policy experience and his personal narrative. The visit is Carson’s second foreign policy trip as a presidential candidate, following a surprise visit to Jordan to visit Syrian refugees after Thanksgiving.

“I have a tendency to like to see things first hand,” Carson told Hewitt, noting other fact-finding trips he’s taken. “I went down to the Arizona border, I went to Ferguson, I went to Baltimore.”

“I think a lot of our policy in the future is going to affect Africa,” Carson added.

Carson said he selected the three countries for a mix of personal and political reasons. He selected Kenya, he said, because that’s where his family traces its roots. “My ancestors are from the Kenya/Tanzania region, the Turkana tribe, I’ve had all of that traced back,” he said.

“In Nigeria, I want to get an idea from the people what the effects of Boko Haram are—what the people are thinking, what the economic situation is there—and also there is a medical school there named after me I want to visit,” he said. And Zambia because that’s where the Banda twins—conjoined twins he separated nearly 18 years ago—live, and they are set to graduate from high school this year.

Carson acknowledged that “earth-shattering events” have contributed to the decline of his poll numbers, which are down significantly amid questions about his knowledge of national security issues after the Paris and San Bernardino attacks

“It will require time for people to actually listen to what I’m saying about the security of our nation and foreign policy rather than just making assumptions,” he told Hewitt.

Carson said that unlike the Jordan trip, he will allow press to accompany him this time around.

Carson also responded to President Barack Obama’s call to ban those on the ‘no-fly’ list from purchasing firearms, saying the list includes too many innocent Americans to use it as a disqualifier. “Why should those people have their Second Amendment rights infringed upon because we have a system that doesn’t work properly,” he said. 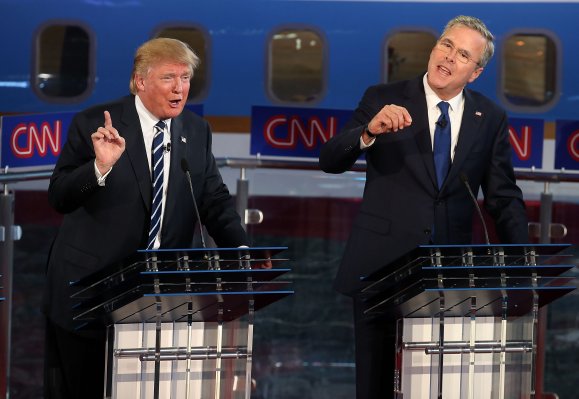 JebBush.com Now Takes You to Trump's Campaign Site
Next Up: Editor's Pick