This Year's Gun Sales Could Set Record for U.S.

On Black Friday, the FBI said it processed 185,345 gun background checks, the most recorded in a single day. In November, the FBI conducted 2,243,030 checks, one of the highest months on record, and for the year has processed 19,827,376. And that was all before the shootings in San Bernardino last week, which killed 14 and injured 21. Reports from several states show increased gun sales since then, and if the last few months are any indication, the FBI will likely process more gun background checks this year than any since it began conducting them almost two decades ago. 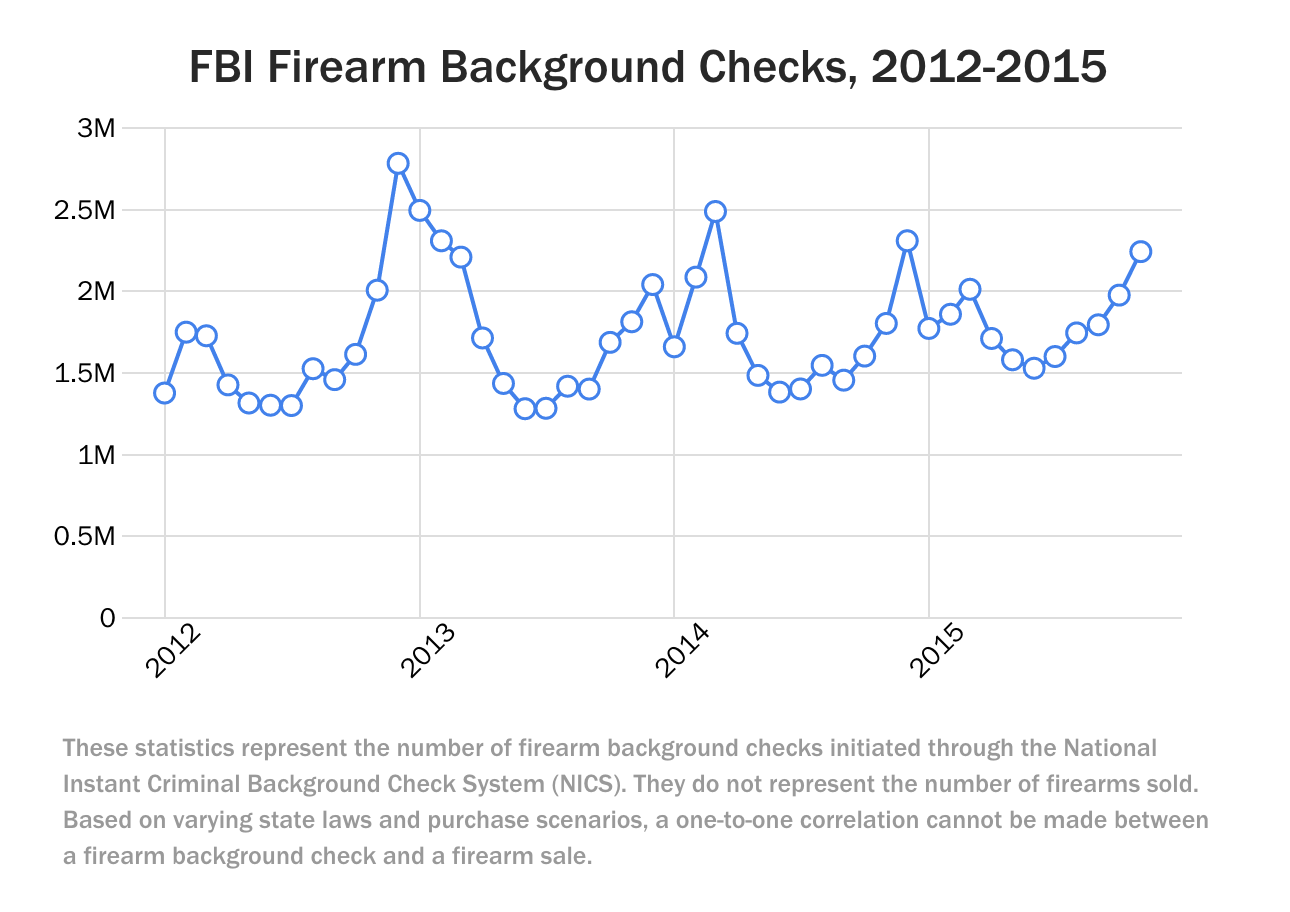 Those spikes in background checks, which must be conducted for any gun sale from a licensed dealer, have followed a number of devastating mass shootings this year, including the deadly incident at a historically black church in Charleston, S.C., in June that killed nine, the shooting at Umpqua Community College in October that killed nine and injured nine, a shooting at a Planned Parenthood clinic in Colorado Springs, Colo., in November that killed three and injured nine, and the latest shooting in San Bernardino, Calif.

Spikes in gun sales regularly occur following mass shootings, often over concerns of increased gun regulation or because people are looking for increased protection. A particularly notable increase occurred after the re-election of President Obama and the shooting at Sandy Hook Elementary School that killed 20 children and six adults. From November 2012 through March 2013, the FBI conducted more than 2 million monthly background checks, the biggest spikes the agency had ever seen at that time. (Gun sales also appear to vary seasonally, rising in winter and falling in summer.)

Background checks are essentially the only way to track the number of guns sold in the U.S. Since the inception of the National Instant Criminal Background Check System in 1998—mandated by the Brady Handgun Violence Prevention Act of 1993—the FBI has processed 222,363,898 background checks for firearm sales and permits combined. Based on varying state laws, a one-to-one correlation cannot be made between background checks and firearm sales, according to the FBI.

And this number only represents gun sales through licensed dealers—the extent of the Brady Act’s reach. The number of private sales that do not go through federal background checks is unknown but has been estimated at around a third of all gun transactions.

The U.S. Postal Service Will Now Email You Pictures of Your Mail
Next Up: Editor's Pick