President Obama delivered a rare prime time address from the Oval Office on Sunday in an effort to quell fears that the U.S. is particularly vulnerable to terrorism following last week’s mass shooting in San Bernardino, Calif.

“I know that after so much war, many Americans are asking whether are we are confronted by a cancer that has no immediate cure,” Obama said Sunday, standing behind a lectern in the Oval Office. “The threat from terrorism is real but we will overcome it. We will destroy [ISIS] and any other organization that tries to harm us…we will prevail by being strong and smart.”

“Lets make sure we never forget what makes us exceptional,” said Obama, who spoke before heading off to the Kennedy Center Honors celebration in Washington, D.C., a trip he almost canceled for the address. “Let’s not forget that freedom is always more powerful than fear.”

The 15-minute speech was more about reassuring the public than announcing any major changes to the ongoing fight against the Islamic State of Iraq and Greater Syria (ISIS) or revealing new details about the ongoing investigation in California. On Sunday night, the Commander in Chief sought to take on the role of the nation’s teacher, soberly outlining the threat of terrorism based on high-level intelligence and giving a broad overview of the existing efforts the U.S. is putting forward to defeat and ultimately destroy the terrorist network.

President Obama also acknowledged the changing nature of terrorism amid the rise of ISIS, saying it’s imperative that the American people remain vigilant and aware while resisting urges to discriminate against Muslims and immigrants to America in efforts to keep the homeland safe. He called on all Americans, of every faith to reject “discrimination.” That kind of “betrayal of American values” plays into the hands of groups like ISIS, he said.

“[ISIS] does not speak for Islam, they are thugs and killers,” the President continued. “We cannot turn against one another by letting this war be defined as a fight against Islam.”

Obama stopped short of delivering news of any new efforts to take out the terrorist network ISIS, instead insisting that the international coalition the U.S. is leading has already ramped up targeted attacks against the group’s strongholds. The end goal, he said, is to destroy the group, which may have inspired the shooting in California, and bears responsibility for the Nov.13 attacks in Paris.

Since the shooting, President Obama has spoken to both British Prime Minister David Cameron and French President François Hollande about increasing strikes abroad. The U.K. Parliament voted last week to join the coalition air campaign in Syria. But he insisted that Americans would not be drawn into another ground war like in Afghanistan and Iraq.

The speech Sunday focused more on the terrorism aspect than Obama has in recent days, though he also called for stricter gun-control measures — a line that’s drawn ire from Republicans in Congress and seeking to succeed him. “I know there are some who reject any gun-safety measures, but the fact is that every intelligence and law-enforcement agency cannot identify every mass shooter,” Obama said. “What we can do and must do is make it harder for those to kill.”

Obama did call on Congress to block people on no-fly lists from getting guns — a measure that failed in the Senate this week — and urged them to vote to authorize the use of military force against ISIS. “I think it’s time for Congress to vote to demonstrate that the American people are united and committed to this fight.”

There are still few clues as to motive in the shooting rampage of husband and wife Syed Farook and Tashfeen Malik that killed 14 people and injured over a dozen more in San Bernardino. Federal authorities are currently investigating the attack as an act of terrorism, with investigators citing evidence they had been radicalized and inspired by ISIS terrorists — though there is currently no indication that either were directly linked to the terrorist network. Assault weapons, ammunition, and supplies to make bombs were discovered in the couple’s home. The husband had reportedly traveled to Saudi Arabia in 2014 and the wife is believed to have pledged herself to ISIS ahead of the massacre.

“We are looking at everything we can find out about these two killers’ lives,” said Attorney General Loretta Lynch during an appearance on NBC’s Meet the Press on Sunday. But, she said, the nature of the attack and the apparent lack of a link to a broader terrorist group indicates the “evolving nature” of the threat of terrorism. “We have come from a time of the large scale, planned al-Qaeda-style attacks to the encouragement of lone wolves,” Lynch said. “The encouragement of people to act on their own.”

A senior Administration official said Sunday that because the San Bernardino shooting was an act of homegrown terrorism, federal investigators likely would not have detected plans set out by the California couple beforehand. Homeland Security Secretary Jeh Johnson told the New York Times on Sunday that terrorists have “outsourced” attempts to attack the U.S., which calls for a “whole new approach.”

As the 2016 race ticks on, Obama was in the position of having to deliver his remarks as Republican presidential candidates upped their hawkish tones on Sunday talk shows and on the campaign trail. Senator Marco Rubio blamed Obama for weakening U.S. intelligence gathering; former Florida Governor Jeb Bush said Obama “hasn’t had a strategy” on destroying ISIS; and businessman Donald Trump didn’t rule out tracking Muslims who may be linked to terrorism. “You have people that have to be tracked. If they’re Muslims, they’re Muslims. But you have people that have to be tracked,” said Trump, who live-tweeted criticisms of the President’s speech.

A senior Administration official said Obama’s goal on Sunday was to provide context to the American people, and counter rhetoric that can be seen as divisive, particularly among American Muslims. Obama has repeatedly said that without the help of the Muslim community it will be difficult to reach individuals who are susceptible to radicalization. On Sunday, he called on Muslims across America to reject extremist narratives and provide alternatives to those who could be radicalized. 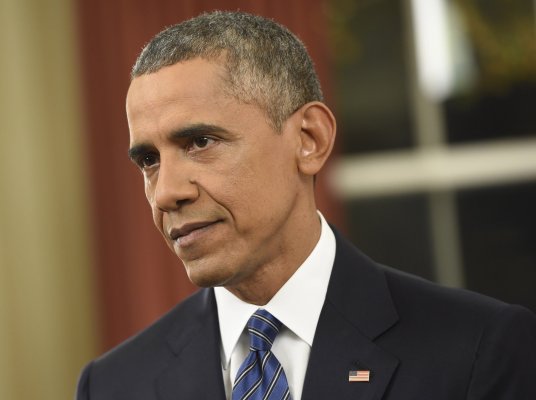 Watch Live: President Obama Addresses the Nation on Terrorism
Next Up: Editor's Pick