The Leftovers Season Finale Denied Us Answers, and It Felt Great

Justin Theroux in season 2 of The Leftovers.
Van Redin—HBO
By Daniel D'Addario

In its second season finale, The Leftovers solidified its claim as one of TV’s best dramas by digging in further on the qualities that frustrate its critics.

Some fan theories about the three girls who disappeared at the season’s start were indeed proven correct—the three had faked their disappearance in order to (willingly) be used as part of a stunt staged by members of the Guilty Remnant cult to overtake and despoil the town of Jarden. After the distraction of the three girls threatening to act as suicide bombers on the bridge between Jarden and the Miracle National Park, the bomb doesn’t go off; there is no bomb. It was all a ploy to distract law enforcement in order to ruin the world’s one safe space. And yet even the answers to the show’s central mystery only opened up more questions. Critics and partisans of The Leftovers can agree that the show is unusually withholding, but the degree of mystery in this season’s final moments made for a beautiful, frustrating experience.

We learn, for instance, that Kevin wasn’t involved in their disappearance, but had witnessed it while attempting suicide, an act he barely seems to comprehend himself and one that only failed due to mysterious geological (or supernatural) phenomenon. Why had three seemingly well-adjusted residents of the only town left unscathed by global cataclysm felt the need to bring fear home? It’s open for interpretation; the closest thing to a concrete statement of purpose we get is a message Evie (Jasmin Savoy Brown) writes on a sign and shows her mother (Regina King): “You understand.”

Surely, for some, this won’t be enough; it’s both enigmatic to a fault and a reiteration of a theme to which the show returns a touch too often—that everyone was deeply damaged by the events of Oct. 14 (spoken of, here, like Sept. 11, but impossible to explain within the framework of politics or history). There’s no one reason that Evie, a prized daughter of a family that by all appearances treats her well and someone who understands Oct. 14 only as other people’s problem, should want to destroy her own town. (We know she was upset as a child by her father’s now-concluded incarceration, but to ascribe her terrorist impulse solely to this trauma is lazier than the show.) But Brown’s and King’s performances, in the moment, add many possible interpretations. To this viewer, King did understand.

It’s fitting that on a show all about humans doing their utmost in the face of ungovernable, wild forces, that the actors often save the material. King and Brown bring reason—or reasons, plural and plausible—to insanity. And Justin Theroux does his best acting on the series so far in a scene that could all too easily have been a parody of cable-TV ambition, when he’s in purgatory and must sing Simon and Garfunkel’s “Homeward Bound” in order to escape. His performance is far more profound than the staging, because the singing is painfully human and the idea is the sort of thing that seems far better in the perfection of a writer’s mind. There are big-to-the-point-of-unwieldy ideas at play here, but they’re played out by actors whose humanity—King’s moment of recognition, Theroux’s pedestrian singing—brings us back to earth.

The best drama series of the last decade were watched by just about everyone who cared about good TV and assayed the lives of men who were in large part able to dominate their situations: Tony Soprano, Don Draper, Walter White. The best drama series today—Fargo, Mr. Robot, The Leftovers—show us sweeping ensembles of people in worlds that are unconquerably spinning towards disorder and pain. There’s a reason beyond an ever-splintering audience, it seems, that they’re not quite Breaking Bad-sized zeitgeist hits.

The Leftovers, notably, has struggled to find its audience. Unlike Fargo, set amidst Carter-era “malaise,” and Mr. Robot, explicitly about Occupy-era anti-corporate concerns, its whole point is denying that explanations exist. I was among the viewers who found season 1 tantamount to unwatchable, with an unrelenting depiction of grief that only occasionally found modulation. If no answers were forthcoming, why have blind faith in this? But this season has provided an alternate viewpoint. In season 1, darkness and pain reigned; Sunday night’s finale gave as much joy as it did cataclysm. Mary (Janel Moloney) finally emerged from her coma, proving that her husband Matt (Christopher Eccleston) had not been deluded about her previous moment of clarity. And prodigal son Tom (Chris Zylka) returned to Kevin’s home ready to take part in family life at last.

In the season’s final moments, the dream of Jarden has evaporated for reasons known only to Evie and her co-conspirators. “Each town looks the same to me,” sings Kevin in purgatory, and now Jarden really is just like everywhere else. But Kevin’s entire family is together. The Leftovers could run ten seasons and we’d be as likely to learn why Mary woke up as we are to learn why two percent of the world’s population vanished (we’ll never learn either, I’d bet). But the fact that one, finally, seemed more important than the other, if only for a moment, broke the series’ malign spell. Who needs an explanation when joy is there, ready to be accepted after two years of heartbreak? 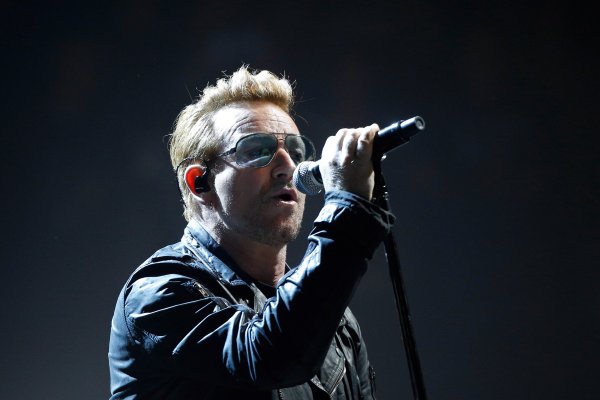 'Tonight We Are All Parisians,' U2 Says Defiantly During Concert
Next Up: Editor's Pick