President Obama urged new gun control measures in his weekly radio address Saturday, calling Wednesday’s shooting in San Bernardino an “act of terror” and “a tragic reminder that here in America it’s way too easy for dangerous people to get their hands on a gun.”

“Right now, people on the No-Fly list can walk into a store and buy a gun. That is insane,” the President said. “If you’re too dangerous to board a plane, you’re too dangerous, by definition, to buy a gun,” He called on Congress to close that loophole, to make it more difficult for potential terrorists to purchase weapons, especially military-style assault weapons, which he called “weapons of war.”

The President also offered his condolences to the families of the 14 people killed in the San Bernardino shooting last week, and said that the government was doing everything in its power to get to the bottom of what happened. “It is entirely possible that these two attackers were radicalized to commit this act of terror,” he said. “And if so, it would underscore a threat we’ve been focused on for years—the danger of people succumbing to violent extremist ideologies.” The FBI has said it is investigating the case as terrorism.

Alleged shooters Syed Farook and Tashfeen Malik may have been radicalized to commit their attack, FBI director James Comey said Friday, and the bureau is investigating whether they were inspired by foreign terrorist organizations. However, the director said there is not yet any indication they were part of a larger network or terror cell.

Obama ended on an upbeat note, concluding that the San Bernardino shooting should not make Americans live in fear. “We will uphold our values—a free and open society,” he said. “We are strong. And we are resilient. And we will not be terrorized.” 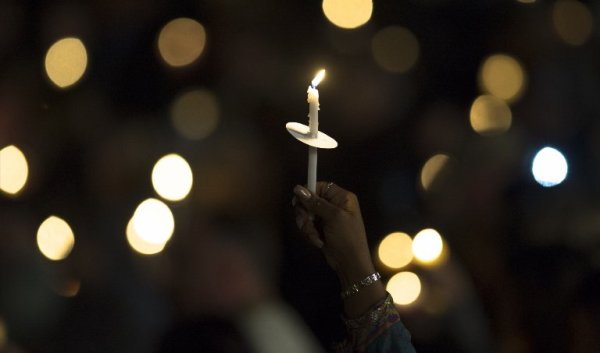 This Is What It Takes for Mass Murder to Be ‘Terrorism'
Next Up: Editor's Pick