A lawyer for the family of one of the suspects in the San Bernandino shooting said that the media has been unfairly smearing his client because he is Muslim.

“Until there is absolute clear evidence, every headline doesn’t have to say ‘Muslim massacre’ or ‘Muslim shooters,’” said David Chesley, a lawyer for the family of Syed Farook, part of the husband-wife team allegedly behind the attack. “Because it’s going to cause intolerance and what we need is forgiveness.”

Chesley said in a press conference that the media was unfairly characterizing his client’s actions as terrorism-related, when there is also evidence that Farook may have had trouble at work and the attack could have been a work-related incident. He noted that co-workers may have teased Farook about his beard, which could have caused him to snap.

“When someone goes crazy and commits an act that probably could be work related, it doesn’t make a statement about an entire religion,” he said. Chesley also said that his client’s named is being smeared in a moment of increasing intolerance, as some presidential candidates are calling for all Muslims to register with the government.

Syed Farook was a U.S. citizen and his wife Tashfeen Malik was Pakistani and in the country legally on a visa by marriage to Farook. The couple, who are the parents of a 6-month old daughter, were both killed in a shootout with police after they allegedly shot and killed 14 people at the Inland Regional Center in San Bernardino. The FBI says it is investigating the incident as a terrorist attack, partly because of internet postings that suggest a connection to radical Islam.

The lawyer said the entire Farook family is shocked by what happened, and rarely spoke to Malik, whom he described as a “housewife” who usually wore a burka and who rarely showed her face even to her husband’s relatives. “This was their brother by blood, but they weren’t so close to him,” he said.

Chesley added that engaging with Internet content about radical Islam is not enough to prove that his client was a terrorist, explaining, “I’ve checked out a Britney Spears post, and I hate Britney Spears music.” 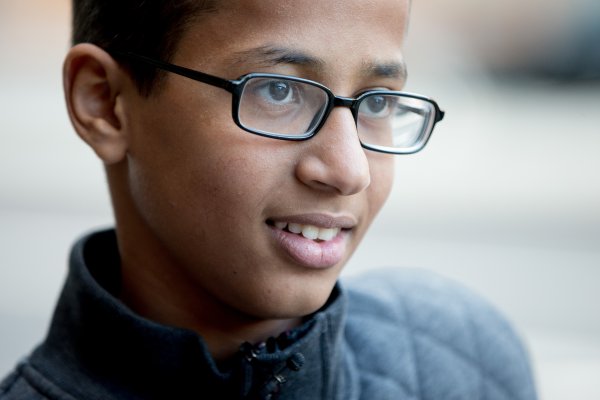 Feds to Probe Case of Ahmed the Clockmaker
Next Up: Editor's Pick