Here’s some good news for Donald Trump fans: History is now on his side.

For months, members of the Republican Establishment have dismissed Trump’s chances at snagging the party’s presidential nomination. But he’s still ahead in the December polls, a signal that has boded well for GOP candidates in the past.

In fact, according to a 1999 Gallup poll analysis, in almost every election since 1952, the leader in the Republican polls in the fall ended up being the party’s nominee.

According to the most recent poll from CNN, Trump is beating his nearest competitor, Texas Sen. Ted Cruz, by 20 points, and he’s consistently been near the top of the pack since the summer.

Of course, the wildcard nature of this election suggests that there’s a good possibility the future might not look anything like the past.

One exception: 1964 nominee Barry Goldwater. In the fall of 1963, he was polling neck-and-neck with Nelson Rockefeller and not considered a clear frontrunner, but went on to win the nomination.

Democrats tend to be less predictable, and there are multiple examples of Democratic candidates who had wide leads a year before the election who went on to lose the nomination. Howard Dean was leading by double digits in late 2003, but lost the 2004 nomination to John Kerry. TIME declared Senator Edmund Muskie the frontrunner for the Democratic nomination in 1972, but George McGovern was picked at the convention.

Of course, presidential elections are held only every four years, and elections where neither side has an incumbent are even rarer, so drawing conclusions from the small sample of results is always a risky proposition. But for now, Trump can count history in his favor.

Read Next: Why Billionaires Aren’t Lining Up to Torpedo Trump 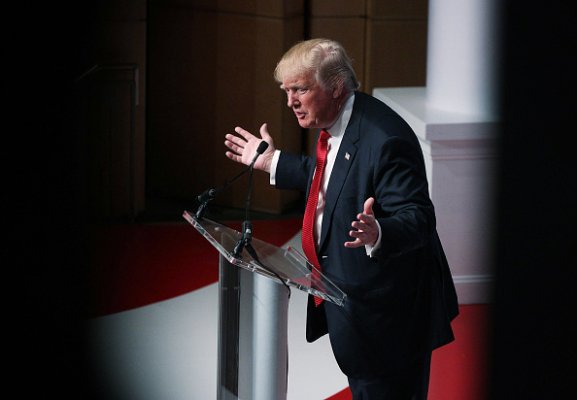 Why Billionaires Aren't Lining Up to Torpedo Donald Trump
Next Up: Editor's Pick