Syrians With Links to ISIS Are in Thailand to Attack Russians, Reports Say

Tourists enjoy the beach at Pattaya in this file photo from 2013. The city remains a popular destination, drawing throngs of travelers throughout the year
Jonas Gratzer—LightRocket/Getty Images
By Nash Jenkins

Ten people from Syria with links to the Islamic State of Iraq and Greater Syria arrived in Thailand in October to stage attacks on Russians in the country, Reuters reports.

In an urgent document dated last month that has since been leaked, Thai police urged heightened security in “target areas that Russian authorities are concerned about,” citing Russian intelligence that claimed ten Syrians entered Thailand between Oct. 15 and Oct. 31.

Reuters reported police as saying that the Syrians in question split up and traveled to Pattaya, Phuket, and Bangkok — areas popular with Russian and other holidaymakers — as well as to an unnamed location.

Thailand is one of the world’s biggest travel destinations and its tourism industry is still on edge from the bombing of Bangkok’s Erawan Shrine in August, which killed 20 people and injured dozens.

Since Russia began an aggressive air-strike campaign in Syria at the end of September, ISIS extremists have made its citizens a target of their hostility. The militant group took responsibility for the bombing of a Russian commercial plane over Egypt on Oct. 31, which killed all 224 passengers on board. 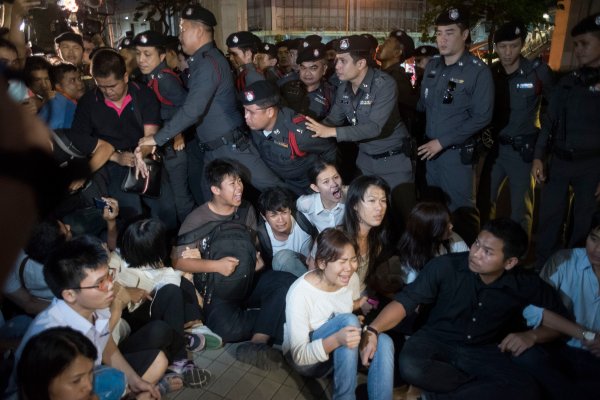 Thai Academics Demand End to Intimidation
Next Up: Editor's Pick