A Very Murray Christmas is the Boring, Fantastic Christmas Special You've Been Waiting For

The new holiday special A Very Murray Christmas, new to Netflix on Friday, is beneath Bill Murray and Sofia Coppola. And yet it’s exactly the sort of thing there should be more of.

Let me explain. Murray and Coppola, who last worked together on the 2003 film classic Lost in Translation, have re-teamed for a streaming-service Christmas special that feels like the ultimate in larks; both the acting and the directing are coasting by on charm. The brief special tells a wispy story of Murray’s snowbound holiday in a New York City hotel (the hotel feels like a prison, as in at least two of Coppola’s feature films; he’s eventually joined by Maya Rudolph, George Clooney, and Miley Cyrus, among others). At less than an hour, it’s a bit draggy—among the many moments that I might have cut, Cyrus’s performance indicates she’s one more staid gig “proving she can really sing” away from sacrificing whatever is interesting about her career on the altar of respectability.

In that interview, Coppola says Martin felt, in his Christmas shows, “like he just drove in on his convertible,” and in modeling A Very Murray Christmas after the Martin aesthetic, she may be governed by values greater than aesthetic purity. Murray and Coppola were both paid by Netflix to conduct a brand-building exercise for which neither party seems to have worked terribly hard. In Lost in Translation, Murray seemed to be stretching emotionally to play an aging actor cashing in; here, he seems to be playing the same part, but less effortfully and more filled with glee.

But A Very Murray Christmas deserves applause, and not merely because artists like Murray and Coppola getting to do their own thing between movies is good. The special is acting out a pose of woozy self-regard, sure, but it represents a commitment to a point-of-view more sustained than many single hours I’ve seen recently. The best-case-scenario for outlets like Netflix is to give artists an outlet to do exactly what they want to do, and this production was clearly unburdened by network notes. And while nostalgia for its own sake is no virtue, there’s something to the timelessness of this special that clicks. Cyrus aside (and who knows, she may be with us for 40 years), there’s nothing that particularly pegs this to 2015, or to the 2010s at all.

One imagines families sitting around this for decades to come on Christmas Eve, just like my family sat around a VHS of A Muppet Family Christmas. That everyone will be a little bit bored is the strange joy of holiday specials; the banality won’t overshadow the viewer’s own Christmas celebrations. It’s the opposite of how Mariah Carey’s endlessly splashy public celebration of Christmas gets a bit depressing by December 15. If someone as dynamic as Bill Murray can be boring on Christmas, maybe you, the viewer, are having the best Christmas of all. 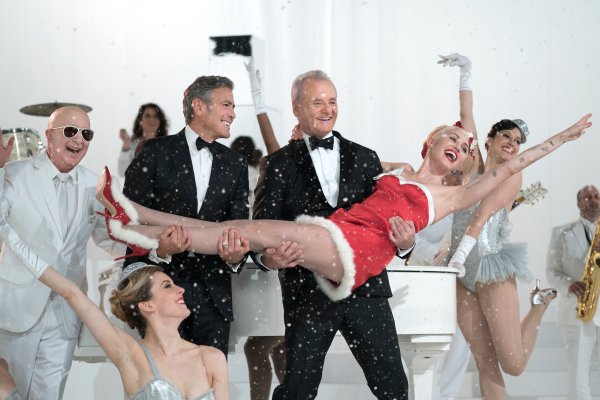 A Very Murray Christmas Director Sofia Coppola: I Wanted To Do Something 'Joyful'
Next Up: Editor's Pick