Ice blocks harvested in Greenland and installed on the Place du Pantheon as the COP21 continues in Paris on Dec. 3, 2015.
Benoit Tessier—Reuters
Ideas
By Carol M. Browner
Carol M. Browner is a former administrator of the Environmental Protection Agency and former director of the White House Office of Energy and Climate Change Policy.

Global climate agreements invariably get hammered out in the waning moments of the conference with negotiators operating on little sleep and lots of bad coffee. While we don’t yet know whether Paris will break that mold, we do know it is starting differently.

World leaders, rather than rehashing old arguments, have looked to what their own countries can do—180 countries arrived in Paris having already worked out targets, goals and plans to reduce their carbon and greenhouse gas pollution.

The U.S. is no exception. President Barack Obama deserves credit for bringing an ambitious commitment to Paris and a real plan to back it up. Cleaner, more efficient, cars and trucks. Less pollution from dirty smokestacks. More clean, renewable energy. His administration also deserve credit for working with other nations, including China, to ensure they have plans for action.

While these are all good plans, ultimately they have to be more than just plans. They have to be real. And then we will have to go further. The importance of Paris will unfold for years in several ways.

Enhanced transparency and accountability to ensure that the commitments made in Paris are being fulfilled will be essential. Each country must not only commit to reduce greenhouse gas emissions but must ensure that the implementation of their plans is meeting metrics and that progress can be viewed by all. The public has a right—and a need—to know whether their governments are on track and what more needs to be done.

We will need a new era of investment to secure near term deployment of existing carbon-free technologies and over the longer term a new generation of technologies. Here in the U.S. we have the opportunity to expand our use of renewable energy and enhance energy efficiency efforts. The right federal, state and local policies can give investors the certainty they need to maintain and build carbon free energy sources including nuclear, wind and solar. Many clean-energy technologies have advanced to the stage where they are now cost-competitive with fossil fuels.

Investment in developing countries will allow them the opportunity to take advantage of existing carbon-free electricity sources as they grow their economies. And the announcements by the U.S., China, India and other countries that they will double their national clean-energy research and development budgets, paired with efforts from Bill Gates, Michael Bloomberg and other pledges to make massive investments in clean energy, will bring unprecedented resources to developing even better technologies to drive the next generation of solutions.

Finally, we must commit to an upward slope of ambition. As important and meaningful as the 180 individual country plans are, they will need to be built on. Ultimately progress will require commitment from all of us: young and old, businesses small and large, governments developed and developing. But perhaps most important, we must make a moral commitment that meets the growing urgency for action.

For the U.S. the 180 country plans present an opportunity. Our cost-competitive technologies create a tremendous opportunity for our clean-energy sector to innovate and, while doing so, create American jobs and protect the health of Americans and people all over the world from the dangers of carbon pollution and climate change.

Paris has launched revolutions that have altered the course of history before; this time it is poised to ignite a clean-energy revolution that will transform how we create energy and alter the course of human existence for the better. 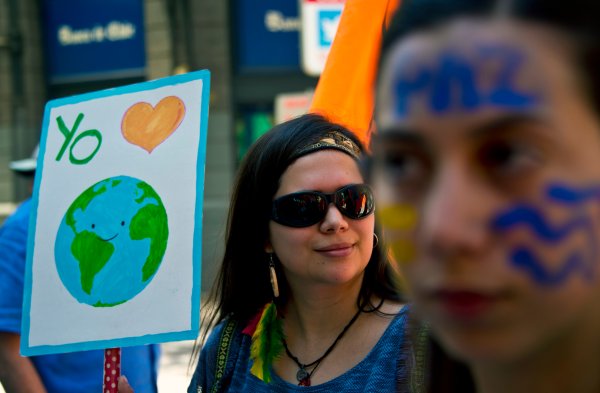 Paris Climate Talks Not Enough for Some
Next Up: Editor's Pick