Francois Hollande poses with the Mayors of Paris, London, New York, Seoul, Dakar and Rio de Janeiro during the Mayors Summit, as part of the COP21 in Paris on Dec. 4, 2015.
Stephane de Sakutin—EPA
By Ian Bremmer

We live in a G-Zero world, one with a lack of true global leadership. Just consider climate change—the 250 million people set to be displaced by unchecked warming in the next few decades alone will make Syria’s humanitarian crisis look like a blip. And yet the hopes for a unified global response are slim. Still, negotiators at the UN climate change conference in Paris seem likely to find ways to move the needle even in a leadership vacuum. Here’s what you need to know.

1. Where We Are Today

The world is now more than halfway toward exceeding the 2 degree Celsius threshold scientists have warned could make global warming catastrophic and irreversible. The World Health Organization estimates that climate change is already responsible for 141,000 deaths annually—by 2050, that number is projected to rise to 250,000. The World Bank expects global warming to push 100 million people into extreme poverty by 2030.

As ocean temperatures rise and glaciers melt, weather-related disasters will grow in both frequency and severity. In the last two decades, floods have hit 2.3 billion people, mostly in Asia. Droughts have affected more than 1 billion people, primarily in Africa. Heat waves have killed nearly 148,000 people, the majority of them in Europe. Wildfires have affected 108,000 people and have cost more than $11 billion dollars in damages to the U.S. No part of the world is immune.

Those are terrifying numbers—terrifying enough to bring the world’s leaders to the negotiating table multiple times before, but not quite bad enough to get them to agree on anything substantial. The push to address climate change at a global level began in the 1990s with the Kyoto Protocol, which aimed to reduce greenhouse gas emissions to 5 percent below 1990 levels. But without ratification by the U.S., among other problems, Kyoto was dead on arrival. The next serious attempt was the Copenhagen conference in 2009, this time with developing powers China, India, Brazil and South Africa taking lead roles. But talks went nowhere substantial.

It turns out that while plenty of countries want to fix climate change, they don’t want to be legally bound to do so. The Paris conference tries to fix this problem by having each country make its own national pledge rather than sign up to a collectively enforced goal. The current pledges, if fulfilled, would reduce the growth rate of the world’s carbon footprint from 8 percent a year to 5 percent. To have a 50-50 shot at keeping the global temperature below the 2 degree Celsius mark, CO2 levels must stop growing by 2020 and then be halved by 2050. We’re not remotely on track.

But the world has to start somewhere. China overtook the U.S. as the world’s lead carbon polluter in total volume in 2007 and has held the title ever since. In 2013, China churned out 28 percent of the world’s CO2. But where other countries are actively trying to ratchet back their emissions below current levels, China has simply pledged to reach its peak CO2 emissions by “around 2030,” which is when experts predict that China’s emissions would naturally peak anyway thanks to economic and demographic changes. China is also pledging to reduce emissions per unit of GDP by 60-65 percent by 2030 compared to 2005 levels, essentially becoming much more carbon efficient. According to Bloomberg, though, that goal is actually less ambitious just continuing business as usual.

Of course, it makes sense for China to offer such weak pledges. Beijing is busy trying to transition from a manufacturing-based economy to a consumer-oriented one, which will impact economic growth. Meanwhile, China’s growing middle class is demanding basics like clean air and water. It’s easy to see why: air pollution kills 1.4 million Chinese people each year. Beijing needs to show that it’s making progress toward delivering the quality lives it’s promised, without comprising the economic growth that underpins them. It’s a tough needle to thread.

Right behind China comes America, responsible for 14 percent of global CO2 emissions. But on a per capita basis, the U.S. emits far more. Each American produces 17 metric tons of CO2 each year on average, compared to 6 tons for the average Chinese. For the Paris meetings, America has promised to cut its carbon emissions between 26 and 28 percent by 2025 compared to its 2005 baseline. That’s pretty impressive when you consider that a full 25 percent of Americans still don’t believe there’s solid evidence for global warming. Only 42 percent of Americans say they are very concerned about global warming. The only international issue that’s less worrying for Americans is territorial disputes between China and its neighbors, which polls at 30 percent.

And then there’s the matter of a Republican-controlled Congress. Within hours of Barack Obama’s arrival in Paris, Congress passed resolutions gutting EPA rules designed to limit carbon emissions. It’s tough to project solidarity with the world on climate change when you can’t even muster it in your own country.

Europe, which is responsible for 10 percent of global man-made CO2 emissions, has taken a more proactive approach to climate change. European leaders have signed a climate change pact among themselves to cut the E.U.’s greenhouse gases 40 percent by 2030 compared to 1990 levels, mirroring their proposal in Paris. If things break right, Germany may even be able to reduce its own CO2 emissions 40 percent by 2020, 10 years ahead of schedule.

But cracks among the 28-member union are beginning to show. Poland’s new government is pushing back against the pact that was signed by the previous government, arguing that the country’s coal-dependent economy will suffer disproportionately.

Of course, between terrorism, tensions with Russia and a refugee crisis, spats over climate are the least of Europe’s worries at the moment. And that’s the crux of the issue. There’s always a clear and present danger that supersedes climate change concerns. The goal in Paris is not to solve global warming, but to help the world keep its eyes on the prize. Let’s hope these next two weeks can achieve that much. 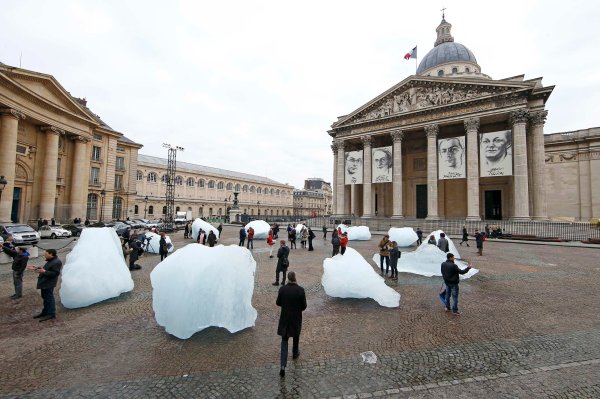 Former EPA Chief: Paris Can Ignite a Clean-Energy Revolution
Next Up: Editor's Pick