Muslim Detained on a Flight: I'm Your Biggest Ally

I’m a Muslim American. On Nov. 15, two days after the Paris attacks, I boarded a plane from Newark to Houston.

I had just returned from a formal event, so I was wearing a plain white “shalwar,” a shirt that stops at the knees and is commonly worn by South Asians. As is my routine, I purchased in-flight WiFi to catch up on emails. But the WiFi was out on the plane, so I resorted to the relaxing indulgences of smartphone games and my iTunes playlist. Not once did I get up from my seat or touch my carryon bag.

It wasn’t until a few hours later—when an FBI agent flashed his badge at me—that I realized the WiFi may have been turned off on purpose. I realized that the many times the woman sitting next to me had gotten up from her seat were likely not to go to the bathroom. I realized that looking foreign can make people think you’re dangerous on a plane.

I hope you never feel the humiliation of having your belongings confiscated out of your hands, or being surrounded by cops who refer to you as “the subject” on their walkie talkies. I hope you never have to, for the first time in your life, sit in the back of a police car.

I hope you get a chance to explain who you are before you are judged. I’m not your enemy. I’m your biggest ally.

I’m a 36-years-old doctor, husband for 13 years, and father of five. I was raised in Texas, and I’ve lived here nearly my entire life. I’m a volunteer with the Houston Police Academy, where I’ve spoken to cadets about diversity, and I’ve lectured at the Department of Homeland Security’s TSA courses, which are taught at Houston-area airports. I’m a U.S. citizen.

I’m also the president of the Ahmadiyya Muslim Youth Association, the oldest Muslim youth association in the country. We’re an organization with 70 chapters and more than 5,000 members that combats Muslim radicalization in America. President Barack Obama awarded us the Presidential Service Award in 2009.

Last year, we launched the “Stop the CrISIS” campaign condemning terrorism, promoting peaceful Islam, and providing the public a safe space to meet and engage directly with Muslim youth. As a part of this, I’ve spoken at press conferences on Capitol Hill and addressed more than 25 nation-states at the U.N.

The formal event that I attended in Newark before my flight began with this declaration: “I solemnly pledge to protect and sacrifice my life for my country,” words which are part of our Muslim Youth USA pledge. There, I issued a press release condemning the Paris attacks, and we planned an elaborate campaign to combat all forms of radicalization, fight hunger in America and promote civic participation.

Ahmadiyya Muslims are a heavily persecuted sect in several Muslim majority nations because of doctrinal differences. Ahmadiyya Muslims believe the Mahdi and Messiah, whom the Prophet Muhammad prophecized would reform Muslims in the latter days, has already come. Our mosques are demolished, our books banned, our men are jailed, and our women and children burned to death—all actions that are driven by the same extremism behind the Paris attacks. For this reason, many of us have safely made it to the U.S.

When I finally got home that night, my kids wanted to know why I was so late. They’re young, so I honestly don’t know how to explain to them why I was detained and interrogated. I now realize that one of my biggest responsibilities as a father is to stress to my children that being Muslim is a source of pride, and never of shame. I realize that I will have to tell them that most strangers are inherently good, but if they hurt you, perhaps it’s out of ignorance rather than malice.

Statement from Houston FBI: “The FBI cannot confirm nor deny any particular individual name because no arrest was made and that is not part of the public record and covered by privacy law. However, I can confirm that FBI and Houston Police personnel were called to respond to reports of a suspicious passenger onboard a Southwest Airlines flight inbound to Houston on November 15, 2016. After further investigation, no threat was found.” 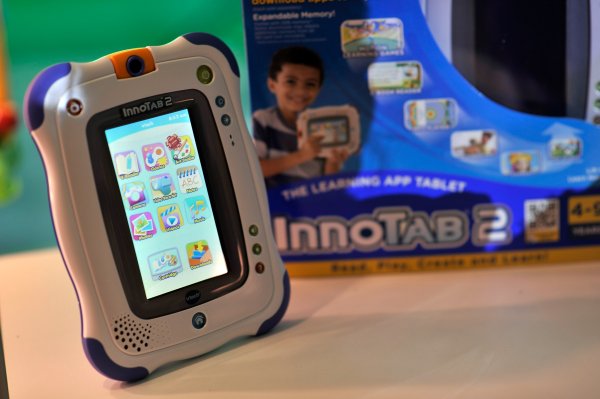 Everything We Know About the Massive VTech Data Breach
Next Up: Editor's Pick