Why the San Bernardino Shooting Is Unprecedented

The mass shooting in San Bernardino that killed 14 people and wounded 21 was unique for its male and female pair of attackers, something experts say has never occurred in the U.S.

Police have named Syed Farook, 28, and his wife Tashfeen Malik, 27, as the two suspects involved in the shooting at the Inland Regional Center in San Bernardino, Calif., which provides services to people with developmental disabilities. Both were killed by authorities Wednesday.

“This is the first time I’ve seen anywhere in the world a public mass shooting attack with a man and a woman that was successful,” said Adam Lankford, a University of Alabama criminal justice professor who studies mass shootings.

Dual attackers in a mass shooting are rare because one person can typically pull the more extreme of the two from turning violent, Lankford said. Mass shooters are also almost always men, with estimates showing that 98% of attackers are male. Men tend to be more violent, and studies have shown that a threat to a man’s societal status can trigger violent actions.

Still, there have been a handful of mass shootings involving women, the most deadly occurring in 2006 when Jennifer San Marco killed seven people and committed suicide at a postal facility in Goleta, Calif.

Profiles of past dual attackers can vary widely. In Columbine, experts largely identified Eric Harris as the likely instigator behind the attack who successfully convinced Dylan Klebold to take part. Similarly, John Allen Muhammad, 42, appeared to have acted as a father figure to Lee Boyd Malvo, 17, throughout the D.C. sniper shootings. Dzhokhar Tsarnaev, who was sentenced to death for the Boston Marathon bombing, has been portrayed as a follower of his older brother Tamerlan by his defense attorneys, but reporting by the Boston Globe has portrayed him more as a co-equal. It’s still unclear whether the suspects in the San Bernardino attacks were equally responsible for the attacks or whether one pushed the other into acting.

“The San Bernardino shooting is very unusual,” said Adam Winkler, a UCLA law professor, citing the husband-wife duo and the fact that they also were parents of an infant. “This couple, with a well-paying job and a six-month-old baby, seemingly had a lot to live for, which is not what we usually see in mass shootings.” 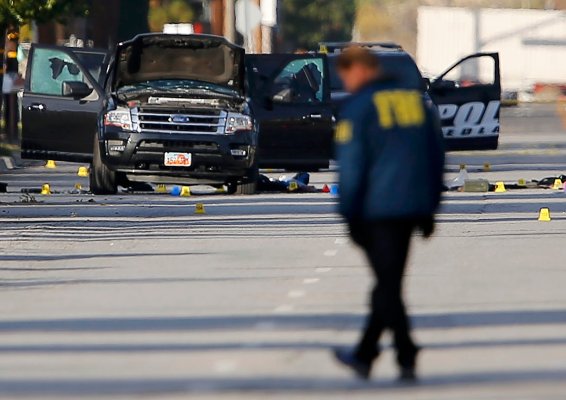 San Bernardino Shooter Had Traveled to Saudi Arabia
Next Up: Editor's Pick