Chris Hemsworth in In the Heart of the Sea
Warner Bros. Pictures
By Eliana Dockterman

Spoilers for In the Heart of the Sea (and the true story behind it) ahead.

The legend of the giant, white whale in Moby-Dick was difficult for some readers, and even some sailors, to swallow. But it turns out that the true story of the ship Essex—which inspired the great American novel and is now getting its own treatment on the big screen in the Chris Hemsworth vehicle In the Heart of the Sea—was even more outlandish than Moby-Dick would suggest.

Nathaniel Philbrick, who wrote the history of the Essex upon which the movie is based, says that in real life, the sailors were marooned on the high sea in three small boats. Though they eventually found land, they determined they could not survive on the meager rations offered by the island on which they washed up. All but three men set out on the seas again. In total, they were forced to survive for about three months with limited rations and fresh water.

According to real accounts from first mate Owen Chase (Hemsworth in the film) and cabin boy Thomas Nickerson (the new Spider-Man, Tom Holland), the men eventually turned to cannibalism.

The crew, according to Chase, “separated limbs from his body, and cut all the flesh from the bones; after which, we opened the body, took out the heart, and then closed it again—sewed it up as decently as we could, and committed it to the sea.” They then ate the man’s organs. Soon they began to draw lots to see who would be shot and eaten next—a custom of marooned sailors dating back to the 17th century. Three men in one boat survived and two in another. The three men who remained behind on Henderson Island were also rescued after surviving on eggs and crabs for nearly four months.

It’s an appalling episode that would make great fodder for a novel, but Moby-Dick author Herman Melville left it out. Philbrick argues, however, that a careful reading of the text reveals the secrets of the Essex.

“And I think that’s kind of what a good novelist does,” he adds. “It’s not a fictionalization of a story, it’s a transformation of a story and all the darkness of the Essex disaster, all the metaphysical fears they had.”

The movie, directed by Ron Howard, is more explicit. Expect large set pieces where men battle the waves and the whale—think Thor-like Hemsworth throwing a harpoon—as well as a saga of their suffering on sea. “It’s the story of man versus nature, which is very exciting,” Philbrick says. “These guys were the original astronauts, the original cowboys. Before there was the Donner party, there’s the Essex tale of cannibalism. Before cowboys and Indians and the buffalo, it was Nantucketers and South Sea Islanders and the whale.” 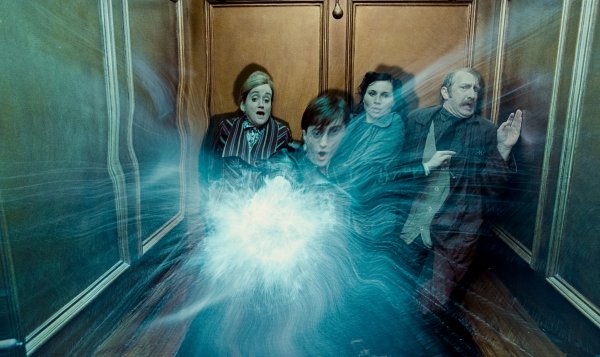 The True History Behind the 'Harry Potter' Spinoff's Ministry of Magic Location
Next Up: Editor's Pick