J.K. Rowling’s The Casual Vacancy: We’ve Read It, Here’s What We Think

It’s not really possible to open The Casual Vacancy without a lot of expectations both high and low crashing around in your brain and distorting your vision. There’s no point pretending they’re not there. I know I had a lot of, let’s call them feelings when I opened the book (which happened on Sept. 22; I work for the military-industrial-entertainment complex, let’s just leave it at that). I have spent many, many hours reading J.K. Rowling’s work. I am a known Harry Potter fan.

I also know enough literary sabermetrics to be aware that the odds of the book’s being good were not short. A lot of young-adult authors, great ones, have tried their hands at literary fiction, and not a lot of them have succeeded. Not even Roald Dahl could switch-hit, and not for lack of trying. All the available evidence suggests that it’s simply a different kind of talent. The most successful example I can think of is T.S. Eliot writing both The Waste Landand also Old Possum’s Book of Practical Cats. And that’s not even a very good example.

But after about 10 pages of The Casual Vacancy, I began to forget about all that stuff and the online rumors about how the book was amazing or awful or had lots of sex in it. I forgot about how I had three days to write a review of a 500-page book. I forgot about everything except the pages in front of me.

What surprised me about The Casual Vacancy was not just how good it was, but the particular way in which it was good. I suppose I’d expected a kind of aged-up, magicked-down Harry Potter, something that showcased the same strengths the Potter books do: meticulous plotting, inventiveness, a love of mischief, likable characters, a knack for visual spectacle. I also expected it to showcase their weaknesses, because all books have them. Yes, I’m a fanboy, but I still think the Potter books have too many adverbs in them, and not enough sex.

But The Casual Vacancy is a different beast entirely. It was not what I was expecting. It’s a big, ambitious, brilliant, profane, funny, very upsetting and magnificently eloquent novel of contemporary England, rich with literary intelligence and entirely bereft of bullshit, and if it weren’t for Rowling’s stringent security measures, it would or at least should have contended for the Booker Prize. This is a deeply moving book by somebody who understands both human beings and novels very, very well. It’s as if Rowling were an animagus, except that instead of turning into a stag or a dog or whatever, she transformed into Ian McEwan.

Before I get into the plot of The Casual Vacancy I want to call out one character in particular, a sardonic, smart-mouthed schoolboy known as Fats, because he’s an instructive point of comparison. Having read all 4,000-and-whatever pages of the Harry Potter series, I thought I’d heard most of what Rowling had to say about the inner workings of teenage boys. I was wrong. Here’s Fats skipping school — he wears his uniform “with the disdain of a convict” — and thinking about his life and his obsession with what he calls authenticity:

Fats, like so many adolescents, has grasped a truth and then made the mistake of believing it to be the whole truth. He could be talking about Harry Potter in that last sentence — messiahs, pariahs, noble misfits — but where Harry lives a fantasy (magic is real, he’s secretly the Chosen One) Fats must coordinate between reality and fantasy, which is a very different task indeed. Long before you get to the “splendid breasts and … miraculously unguarded vagina” of the girl Fats is meeting later for a callous, hasty shag in a graveyard, you know you’re not in Hogwarts anymore, or even in its affiliated den of sin Hogsmeade.

Jane Austen once advised a young writer that “three or four families in a country village is the very thing to work on.” Rowling is on the Austen plan here. The Casual Vacancy is set in a small, picturesque English town called Pagford. It begins with the sudden death of Barry Fairbrother, a member of the Pagford Parish Council, which is locked in an internal struggle over the Fields, a low-income housing development on the border with Pagford’s larger and less lapidary neighbor Yarvil. Some Pagfordians resent the burden of the Fields, the petty crime and the addicts in need of rehab and the children in need of education, and they want to rezone it as part of Yarvil and be done with it. Barry was sympathetic to the Fields, but his death creates an opening on the council — the technical term is a casual vacancy — and in their unseemly haste to fill it, Pagfordians on both sides expose their carefully concealed inner lives. (Rowling may or may not be teasing fans when she writes that “they saw it, not as an empty space but as a magician’s pocket, full of possibilities.”)

Based on that pitch alone, The Casual Vacancy would seem to be light social satire, a skewering of small-town foibles and hypocrisies, but Rowling has always been more ambitious than that. Her interest is in the emotional and social chasms that yawn between us and the grotesque emotional wounds we inflict on those on the other side, always in the belief that we’re acting in righteous self-defense.

Rowling arranges her characters not in neat opposing ranks but in a complex web. Among the solid citizens we meet are Colin, a neurotic deputy headmaster (and the adoptive father of Fats) who wants to carry on Barry’s work; Howard, a deli owner and the leader of the anti-Fields lobby, who’s as fat and nasty as Vernon Dursley but less funny; Miles, Howard’s son and Barry’s former business partner, whom Howard is grooming for the empty spot; Kay, a social worker who visits families in the Fields, including that of Krystal (she of the splendid breasts), whom Barry coached in rowing. It’s in this intricate Gordian tangle — and that’s about a quarter of the full tangle — that one sees most clearly the patient hand that built Harry Potter’s world, a fictional universe so detailed and believable that an entire generation has pretty much chosen to live there. (No one would choose to live in Pagford. But unfortunately we already do.)

The characters can’t go five minutes without lying to someone else or to themselves — the psychic currency of Pagford consists of “things denied, things untold, things hidden and disguised” — and when they do at last try to tell the truth, they discover that the tools at hand, words, are pitifully inadequate for the task. Rowling, by contrast, shows off a new descriptive dexterity, an extra verbal gear that until now she kept in reserve: a used condom in the grass is “the gossamer cocoon of some huge grub”; an old woman’s fingers are “a clutch of bulging knuckles covered in translucent leopard-spotted skin.” Etc.

In Pagford, everybody believes they’re the hero of the story, but as the novel’s point of view restlessly shifts, we see each character recast again and again as villain, victim, fool, lover, ally, traitor. The sexually precocious Krystal is a daughter of the Fields, and each side uses her to bludgeon the other: she’s a cautionary tale, a model of educability, a bully, a fiercely loyal sister who is the only thing keeping her family together. (The story of Krystal and her shattered tribe is the most utterly wrenching thing in the book. Her mother Terri is a hopeless heroin addict, and she plays as a villain for much of the book, until Rowling takes us inside her point of view and shows us why she has to get high, at which point the case against her crumbles.) As the vote over the vacancy approaches, the fight descends into a hail of body blows. Jobs, marriages, reputations and people themselves go down in the fray. Rowling has always had ruthless writerly discipline — this is the woman who killed Hedwig — and she pulls no punches here. And there is no Dumbledore to step in at the end to give everything a meaning and declare a moral victor.

It’s rare to see a writer whom you think you know well unfold a new dimension like this, a dimension you didn’t even suspect existed. The Casual Vacancy is, in a funny way, not so much an extension of the Harry Potter books as their negative image: it’s a painfully arbitrary and fallen world, a world that, bereft as it is of the magic that animates and ennobles Hogwarts, sags and cracks under its own weight. After his furtive coupling with Krystal, a melancholy, postcoital Fats “wished he could simply be transported, this instant, to his attic bedroom.” Harry would have apparated there. But Fats, like the rest of us, must take the long way home. 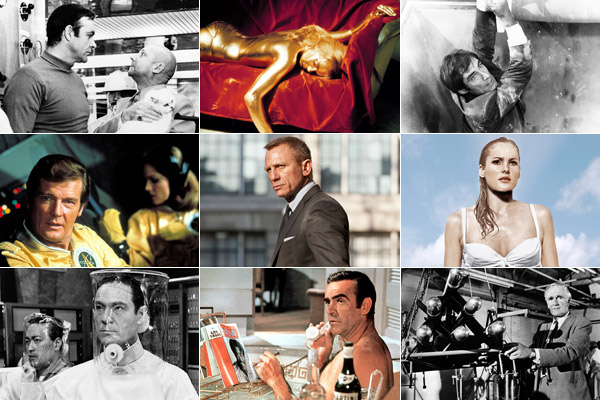 50 Things You Didn’t Know About James Bond
Next Up: Editor's Pick