Rescue workers and volunteers use an inflatable boat to take residents through floodwaters in Chennai, India, on Dec. 1, 2015, during a downpour of heavy rain in the southern Indian city
STRDEL—AFP/Getty Images
By Rishi Iyengar

Heavy rains lashed the southern Indian city of Chennai on Monday and Tuesday, causing widespread flooding in the major metropolis for the second time in less than a month.

Authorities issued a flood warning and educational institutions were closed, with vehicles seen afloat in the floodwaters in many parts of the city. All flight operations at Chennai airport were also suspended after the runway and tarmac were submerged, the Indian Express newspaper reported.

More rain is expected across the state of Tamil Nadu — of which Chennai is the capital — on Wednesday, and the army was deployed late Tuesday evening to manage the situation. The death toll from rain-related incidents in the state has now risen to 188 over roughly the past three weeks, including dozens killed during similar flooding in mid-November.

Indian Prime Minister Narendra Modi said on Twitter that he spoke to the state’s Chief Minister J. Jayalalithaa and “assured all possible support.” 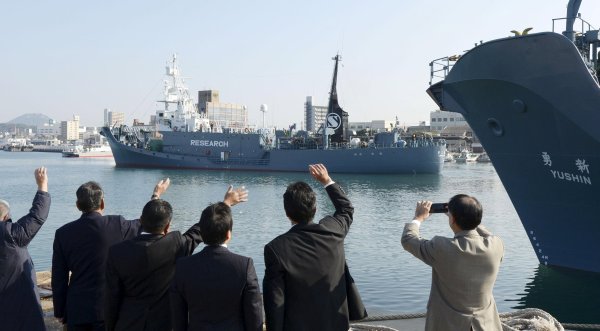 Japan Sets Out to Kill Hundreds of Minke Whales
Next Up: Editor's Pick