Bethany Winder, a nurse who lives in Colorado Springs, Colo., plants a sign in support of Planned Parenthood just south of its clinic as police investigators gather evidence near the scene of Friday's shooting at the clinic on Nov. 29, 2015.
David Zalubowski—AP
Ideas
By Julie A. Burkhart
Julie A. Burkhart is the founder and CEO of Trust Women Foundation and Trust Women South Wind Women’s Center.

Once again, violence has taken hold at a clinic that provides women’s health care, including abortion care, in this country. My heart goes out to the Colorado Springs Planned Parenthood and the families of the three people who lost their lives last week to this extreme, senseless act of violence.

While the gunman’s motives are yet to be revealed, he reportedly said “no more baby parts” once in custody, and the location of the shooting is a reminder enough of the threat facing many who offer abortions. When will the hostility toward abortion providers and clinic staff subside? This question has been asked for far too many years. No one should fear for their life when providing or accessing health-care services.

In the United States, we believe in free speech and stand firmly behind our First Amendment rights. Active discussion and dissent are important elements to our freedom. But I am troubled by the unchecked language that is used to demonize those who work in abortion care and ostracize those who wish to utilize abortion services. Too often, acts of violence and harassment go hand-in-hand with this type of language.

I wish that I could say I had never been touched by such violence. For seven years, I worked with Dr. George Tiller, one of the few physicians in the U.S. who provided late termination of pregnancy, and who was hounded relentlessly for providing medical care to his patients. He trusted women to make their own decisions about their health and their future.

Dr. Tiller’s admirable perseverance cost him his life when an anti-abortion extremist gunned him down in his church. Yet, the story of his assassination began well before that day. The anti-choice community had been pursuing Dr. Tiller for years, using sensationalized language in order to demonize him. Staff members from his clinic also faced intense intimidation tactics at work and at their homes, in endless attempts to shame them out of their jobs.

Following Dr. Tiller’s death, women in Wichita, Kansas, and the surrounding area were left without abortion services. I opened the Trust Women South Wind Women’s Center to re-establish access to full-spectrum reproductive care for the community. It didn’t take long for protestors to re-emerge, congregating numerous times outside of my family’s home. One sign they carried read: “Where is your church?” and another said: “Prepare to meet thy God.” These signs were clear references to Dr. Tiller and meant as death threats toward me and my family. Again, no health provider or patient should face such unthinkable scare tactics.

The fact of the matter is that women will continue to have abortions, whether there are qualified providers or not; whether abortion is legal or not. Women will go to great lengths to either be pregnant or to not be pregnant. No one else can dictate the heart of a woman. But, what we can control is what we provide to women and their families in our society.

Abortion has been labeled a political wedge issue, causing a vast divide in our country. Today, political persuasion strictly defines one’s belief system and creates a polarizing culture. In such a climate of intolerance, it is difficult to see the humanity in those who are different from ourselves.

The truth is that there are areas where we should all agree to put the health and well-being of women and families first. In states with punitive laws regarding abortion care, there is also a lack of funding and resources for women and children who are uninsured or underinsured. This means limited health services and poorer health outcomes. When people have access to contraceptive care and education, they can better control their reproduction and their future.

While the extremists are picketing clinics and harassing physicians, staff and women with threats or acts of violence, these important issues—quality, affordable health care and access to contraception—are shoved aside. In exchange, we’re left with a sensationalized and politicized “debate” on abortion that all too often results in heinous acts of violence.

We can’t bring back the lives lost in this tragic attack. What we can do is consider our words and engage in thoughtful debates that demonstrate respect, rather than intolerance, for those whose beliefs differ from our own. Only then will the violence stop.

Julie A. Burkhart is the founder and CEO of Trust Women Foundation and Trust Women South Wind Women’s Center. 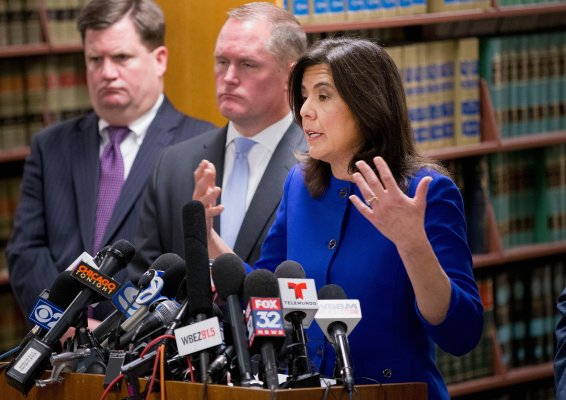 Police Are Not the Only Ones Who Failed Laquan McDonald
Next Up: Editor's Pick