As world leaders gathered in Paris for the opening of the international climate conference on Nov. 30, excavators in a densely forested corner of eastern India were at work extracting coal at what in coming years is projected to become the biggest mine in Asia.

The Magadh project, in the Indian state of Jharkhand, is part of a massive push by the world’s third-largest carbon emitter to close the gap between the amount of coal it produces domestically and the amount it’s consuming, particularly for electricity generation, as its economy grows. India’s aim is to produce 1.5 billion metric tons of the fossil fuel by 2020, up about 600 million tons in 2012. (It currently consumes some 800 million metric tons a year.)

To make this happen, India will need to open the equivalent of a new coal mine every month until the end of this decade. That thirst for coal—the single biggest source of man-made carbon emissions—has made India a country to watch in Paris, where officials from around the world are meeting to try and hammer out a deal to slow rising global temperatures.

For India’s leaders, the expansion in coal generation is needed to power India’s growth and lift hundreds of millions of Indians out of poverty. One in five of India’s 1.3 billion people continue to live without access to electricity, according to the International Energy Agency. For numerous others, power is spotty, with blackouts an everyday fact of life. Coal is dirty—unit by unit, more carbon is emitted burning coal than any other fossil fuel—but it is also cheap and easily available, with India home to the world’s fifth largest coal reserves. “Ultimately, coal-based power is cheaper,” India’s power minister, Piyush Goyal, said, while outlining India’s position at a U.N. meeting in September. “It provides the base load. It can be used to bundle with and to use more expensive renewable power with cheaper power and provides energy access which is the need of the hour.”

To help with the fight against climate change, India is planning, alongside its coal push, a significant expansion in the use of renewable energy sources such as solar. Unlike China, which last year set a target to reduce its fossil fuel pollution by 2030, India has not specified a cap on its emissions. Instead, India plans to improve what’s known as its emissions intensity by using fewer amounts of carbon to fuel its growth.

To do so, India aims add as much as 175 gigawatts in energy generation from renewable sources by 2022. At the start of the Paris summit, India’s Prime Minister Narendra Modi announced the launch of a “solar alliance” made up of more than 120 countries. It is also planning to grow its forest cover absorb more carbon dioxide and implement new technologies to make its energy sector more efficient. “India is planning to add as much in renewable energy capacity as its entire [power] grid over the next 15 years,” says Navroz Dubash, a senior analyst who studies climate change policy at the Center for Policy Research, a New Delhi based think tank.

But even if everything goes to plan, that still means India—currently the world’s third-large emitter by total—will see its carbon emissions continue climbing in coming years. This presents a challenge for delegates in Paris as they try and forge a consensus for an agreement to keep temperatures from rising more than 2 degrees Celsius (around 3.6 degrees Fahrenheit) above the levels in pre-industrial times.

From India’s point of view, the burden should fall on the countries responsible for global warming, not developing nations that are only beginning to grow. Historically, India accounts for only 3% of energy-related carbon dioxide emissions since 1890, according to IEA figures. In per capita terms, India’s emissions stood at 1.6 metric tons in 2014—roughly 10% of the level for the U.S. and a quarter of the level for China. “China has said it will cap its emissions and likely phase out coal after having built a thousand-megawatt power plant a week for the last 15 years,” says Dubash. “China’s emissions are vastly more than India’s, with a population that is only a little bit more.”

Speaking in Paris as the climate conference opened, Modi said “climate justice” demanded that “developing countries should have enough room to grow.” “We hope advanced nations will assume ambitious targets and pursue them sincerely,” he said. “It is not just a question of historical responsibility. They also have the most room to make the cuts and make the strongest impact.”

India is also calling for greater support from developed countries like the U.S. to help developing nations slow emissions and adapt to climate change, a topic that came up on Dec. 1 at a panel discussion at India’s pavilion on the sidelines of the Paris conference. “India is doing as much as it can with its own resources,” India’s spokesman at the conference, Ajay Mathur, said. “With climate financing from the developed world, we can do so much more, much faster.” 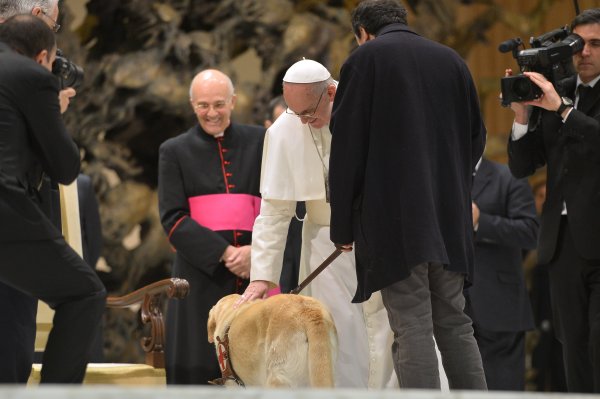 Pope Francis Is PETA's Person of the Year
Next Up: Editor's Pick