September 1946: British troops and Jewish immigrants at the camp near Famagusta, Cyprus, where Jewish refugees are being kept, having been turned away from Palestine.
Charles Hewitt—Getty Images
By Jason Steinhauer / The John W. Kluge Center at the Library of Congress

This post is in collaboration with The John W. Kluge Center at the Library of Congress, which brings together scholars and researchers from around the world to use the Library’s rich collections. The article below was originally published on the Kluge Center blog with the title Retracing the Steps of Refugees on Cyprus.

Eliana Hadjisavvas is a Ph.D. candidate at the University of Birmingham and a current Arts and Humanities Research Council Fellow at The John W. Kluge Center. She sat down with Jason Steinhauer to discuss her research project, “Jewish Displaced Persons and the Case of the Cypriot Internment Camps: The Role of the United States 1945-1950.”

Hi, Eliana. You’re research focuses on an aspect of World War II that is of great interest to me personally. Could you briefly describe your project?

My research focuses on Jewish displacement at the end of the Second World War and specifically the internment of Jewish refugees in British-run camps in colonial Cyprus. For many Holocaust survivors, desperate to flee the horrors of Nazism and threat of further persecution, the yearning for a future in Palestine was great. Since 1917, Palestine had been administered by the British mandatory government that was keen to protect its interests in the Middle East by restricting mass-Jewish immigration, which was opposed by Arab states.

What was official British policy towards Jewish emigration to Palestine?

In 1939 Britain implemented a ‘White Paper’ that capped the rate of Jewish immigration to Palestine at 75,000 over the next five years, with further admissions subject to Arab acquiescence. At the end of the war, Britain continued to uphold its immigration measures by barring the overwhelming number of Holocaust survivors that sought entry visas for Palestine. This led to many embarking on clandestine passages, with thousands of Jewish refugees crammed on small, unseaworthy vessels braving the journey across the Mediterranean, often from ports in Italy, in an attempt to enter Palestine covertly. In August 1946, the British government responded to such movements by establishing internment camps in Cyprus. The erection of twelve distinct campsites in the villages of Caraolos and Xylotymbou collectively housed over 52,000 people and witnessed the births of over 2000 children until the camps dissolution in February 1949.

What were the conditions of the British internment camps on Cyprus?

Life in Cyprus was tough. A lack of food and water, coupled with boredom from ongoing detention behind barbed wire, prolonged the time waiting for Palestine. Britain’s decision to use German Prisoners of War to construct the camps caused further discontent, whilst the erection of watchtowers with armed British guards to prevent people from escaping, was disturbingly reminiscent of Nazi camps, where many of the refugees had been liberated. Signs emblazoned with ‘From Dachau to Cyprus’ reiterated the refugees’ opposition to their imprisonment. The use of German POWs and armed guards was highly insensitive, but it must of course be stressed that these were certainly not death camps. Therefore, whilst the refugees loathed their detention, internment in Cyprus was often viewed as the ‘last stretch’ in the long journey to freedom. In order to provide the refugees with a sense of normalcy, the work of the American Joint Distribution Committee on the island provided the camps with vital relief services from schooling and health care to vocational training and workshops, helping to prepare the internees for life in Palestine.

How did American and Canadian Jews and servicemen figure into this story?

The role played by young American and Canadian men in the story of Cyprus is particularly noteworthy. As Jews, some of whom had fought for the Allies during the war, the need to head to Europe to help their coreligionists in their pursuit of sanctuary was significant. Working with Palestinian aides these men helped equip ships to transport refugees from Europe by sailing them to Palestine. Once boarded by the British, the Americans’ disguised themselves amongst the immigrants to evade detection, which lead to their subsequent internment as refugees themselves in Cyprus. Once they had escaped and returned to the U.S., some would then head back to Europe for a second time, sailing refugees to Palestine and once again winding up in Cyprus. However, not all volunteers had Jewish roots. Inspired by the sense of adventure and the idea of ‘taking-on’ the British in the Mediterranean, helping Europe’s refugees was also an exciting escapade for sprightly young men from secular backgrounds.

What items in the Library of Congress collections are you looking at to help piece together this history?

The Library of Congress has a wealth of resources related to this period. In particular, numerous books and pamphlets on displaced persons from the time have been invaluable in helping to contextualize the Cyprus story within the broader narrative of postwar Europe. Furthermore, various manuscript and microform collections, which include documentation from relief agencies and the papers of U.S. political leaders, have provided a fascinating insight to the official correspondence relating to Europe’s refugee crisis and case of Jewish immigration.

In your travels to Cyprus you have spoken with local residents who remember the camps and have shown you secret caves and tunnels. Can you tell us some of what you learned when you went back to Cyprus?

Whilst the camps may have closed nearly 70 years ago, there are still local Cypriots alive today with memories of the time. For some, their involvement in the camps was far more complex than others. The assistance of Cypriot leftists, often affiliates of the communist party AKEL, aided clandestine escapes through tunnels dug underneath the camps in collaboration with para-militaries from Palestine, largely as a result of a shared anti-British ideology between Cypriots and their Jewish counterparts. When I began my research in 2013, two Xylotymbou residents kindly took me to various sites around the village, which included a cave where Jews who had navigated their way through the tunnels would hide, awaiting Cypriot aides for onward movement. I was surprised to learn that few people knew of this site. Following my initial visit, the Israeli Ambassador also made a trip to the cave and decided to work with Xylotymbou locals to establish a garden in commemoration of the camps, which was unveiled by Cyprus President Nicos Anastasiades in July 2014.

Do you see parallels between the refugees post-World War II and today?

The current refugee crisis in Europe shares disturbing parallels with the end of the Second World War. Although refugees are now pressing Europe’s borders as a point of entry rather than embarkation, the desperation of immigrants crammed on overcrowded boats in search of safety, chillingly mirrors the plight of Jewish refugees 70 years ago.

Part of your project involves interviews with those who either passed through Cyprus or were born there. You are searching for people to come forward and share their personal experiences. Can you elaborate?

Oral history has proven to be one of the most interesting and revealing sources when conducting research on this topic. With the 70th anniversary of the camps opening hastily approaching, it is increasingly important to collect as many testimonies as possible from eyewitnesses. I would therefore be keen to speak to anyone who has memories from this period, either first-hand accounts or those passed down from loved ones who may no longer be with us.

Eliana Hadjisavvas is a Ph.D. candidate at the University of Birmingham and a current Arts and Humanities Research Council Fellow at The John W. Kluge Center. She is in residence at the Kluge Center through December. 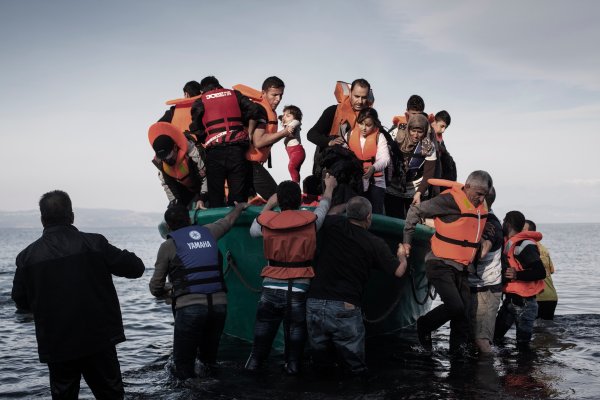 These 5 Facts Explain America’s Shameful Reaction to Syrian Refugees
Next Up: Editor's Pick