Google’s self-driving cars have already driven more than one million miles. But the company has yet to show how the vehicles might signal complex actions to other drivers and pedestrians. Now, a recently granted patent may provide some additional insight.

The patent, which was published on Nov. 24 after initially being filed in Sept. 2012, describes a system in which self-driving cars would be able to display messages to pedestrians at areas such as crosswalks. These alerts could include anything from an electronic sign, to lights, audio notifications, or even a robotic hand to provide waving gestures.

The images included in the document provide some idea of what these signals might look like. One sign, for example, shows a pedestrian symbol with a slash through it to indicate that it’s not safe to cross the street. Another concept shows a stop sign displayed on the side of the car.

Google acknowledges that the ability to communicate with pedestrians is an area where self-driving cars are lacking compared to standard vehicles. “However, other than signaling devices typical to non-autonomous vehicles, such as turn signals, head lights, high beams, brake lights, reverse lights, and some audible signals (horns, reverse light beepers, etc.), autonomous vehicles lack the capability to directly communicate the vehicle’s future behavior,” the document states. “Simply stopping a vehicle without these driver-initiated signals may not be sufficiently reassuring to the pedestrian that it is indeed safe to cross.”

The patent was granted as Google and other companies begin to reveal more about their plans for the future of autonomous vehicles. Automakers from Tesla to Volvo and Mercedes-Benz have announced ambitious production plans, for instance. And Formula E recently announced that it’s working with a company called Kinetik to create the world’s first driverless car racing series.

A patented concept or technology is by no means a guarantee of production. But it doe indicate the ideas are something the company may be thinking about as self-driving cars come closer to everyday reality. 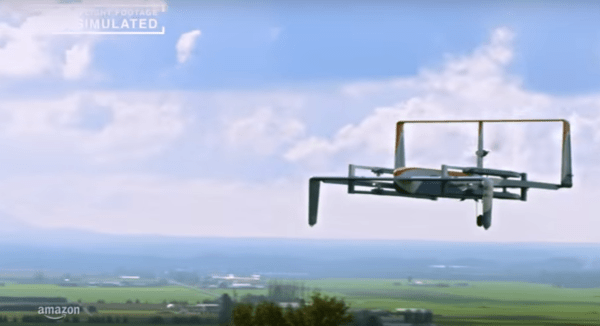 Watch Amazon Deliver Shoes via Drone
Next Up: Editor's Pick