An artwork by French artist JR and U.S. filmmaker Darren Aronofsky is projected onto the French National Assembly building on the eve of the COP21 climate conference in Paris on Nov. 29 2015
Yoan Valat—EPA
By Nash Jenkins

The images of more than 500 people are being projected onto the facade of France’s National Assembly building during the 2015 U.N. Climate Change Conference (COP21) in Paris to “remind leaders that the world is watching,” in the words of the artists behind the project.

The Standing March is the collaborative effort of the French artist known as JR and the American filmmaker Darren Aronofsky. The “representation of humanity” is, the artists said, a message to the 25,000 world leaders who have gathered in Paris to negotiate a plan that will limit the rise of the global temperature to 2°C (3.6°F).

“We expect decisions, we expect commitments, and we expect time frames,” Aronofsky, the controversial filmmaker behind Requiem for a Dream and Black Swan, said in a statement on the project’s website. “It’s about people, from Tuvalu to New Orleans, whose lives are threatened by climate change. The world depends on a solution.”

The conference and the exhibition — which will travel around Paris for seven days after a weekend on the National Assembly building — come less than three weeks after the terrorist attacks that left 130 people dead.

“For security reasons, marches are forbidden in Paris. But our art piece is a silent march,” JR said in a statement. “And we are marching, backed by the Assemblée Nationale, the heart of the French democracy. We must think about our future, the future of our environment and this is our answer to those who want to control our present.” 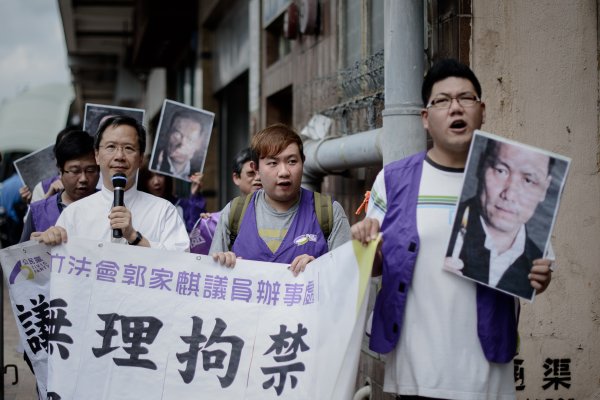 China's Crackdown on Lawyers
Next Up: Editor's Pick