As More Chinese Fall Victim to Terrorism, Beijing Fumbles for a Response

Officers evacuate bodies of victims from the Radisson Blu Hotel in Bamako, Mali, on Nov. 20, 2015, where at least 19 people, including 3 Chinese executives, died
Habibou Kouyate—AFP/Getty Images
By Hannah Beech / Shanghai

On Nov. 20, three Chinese executives were killed when Islamic militants stormed a hotel in Bamako, the capital of Mali. Shortly before, ISIS announced in one of its online magazines that it had murdered a Chinese captive, Fan Jinghui, after having held the Beijing native for at least two months.

The Mali attack, claimed by an al-Qaeda-linked group, ended the lives of 19 victims at the luxury hotel in Bamako, including that of Zhou Tianxiang, a high-ranking manager at China Railway Construction Corp. “He was a hardworking person, and he never told us there was any danger in African countries,” says Zhou Shengjun, Zhou’s nephew. “I wish Chinese companies and the government could provide more training and protection to people who work in a foreign country.”

At least 1 million (and possibly up to 5 million) Chinese citizens are working abroad — part of a roving labor force that has remade the developing world, as Beijing looks overseas for investment opportunities and natural resources. Now, these Chinese expatriates are facing the risks of doing business in some of the most volatile places on the planet, such as in Africa or the Middle East. “Compared with Westerners, Chinese workers or citizens are not the terrorists’ priority target,” says Wang Jian, a senior researcher the West Asia and Africa Institute of the Chinese Academy of Social Sciences (CASS). “Western expats are more vulnerable than Chinese, because the terrorist groups are more hostile to Western countries.”

That may be. But because Chinese-state owned firms are unconstrained by shareholders’ qualms, they operate in countries less frequented by Western firms, whether because of safety risks or the stigma of trading with particularly repressive regimes. Take Africa, which now counts China as its biggest trading partner, although Chinese investment in the continent has contracted in recent months. Across Africa, Chinese labor corps not only develop mines and oilfields to fuel China’s economic engine but they also construct badly needed local infrastructure, such as roads, railways, hospitals and stadiums. If a new telecom or surveillance system is going online in Africa, chances are a Chinese company is involved.

Yet there are risks. Over the past few years, militants have targeted and killed Chinese workers across the continent, from Ethiopia and Nigeria to Algeria. In 2012, militants seized 29 Chinese working on a road project in Sudan. Another 25 Chinese workers at a cement factory in Egypt’s Sinai Peninsula were also taken hostage that year. As the Libyan civil war escalated in 2011, the Chinese government helped extract nearly 36,000 workers from the North African nation — although state-owned Chinese companies largely had to foot the evacuation bill.

One employee of China State Construction — who worked overseas for 15 years in places such as Algeria, Equatorial Guinea and the Republic of the Congo — recalls a colleague dying in a militant raid in Algeria in 2007. “The attack was not targeting Chinese people,” he says, “but [my colleague] was just not lucky.” China State Construction, which has 7,000 senior staff spread across 30 nations, gives its overseas workers handbooks with information on local customs and religious beliefs, says the employee, who doesn’t want his name used because he still works for the company and is not authorized to speak with the foreign press.

In the wake of the recent murders of Chinese citizens by terrorist groups in Africa and the Middle East, China’s President Xi Jinping has vowed to “resolutely fight violent terrorist activities that hurt innocent lives.” Military action, though, is not a familiar course for China. While French troops, for instance, responded to the attacks in Mali, a former colony, China has for many years hewed to a foreign policy of nonintervention in other countries’ affairs.

Still, things might be changing. This year, for the first time ever, China dispatched a combat battalion to take part in U.N. peacekeeping operations in South Sudan, where Beijing has major oil interests. (Previously Chinese troops provided logistics and other support to the U.N.) China has completed a deal to lease land from the Djibouti government for its first military base in Africa, according to the head of the U.S. Africa command, U.S. Army General David Rodriguez. Djibouti is near Somalia, where notorious pirates have targeted Chinese ships, among many others. “We know China is participating in antipirate campaigns near Somalia,” says Wang of CASS, “but Somalia is very far away from China, so China needs a base to provide necessary logistics and supplies.”

Nevertheless, Wang believes that “the Chinese government will be very cautious in using its military overseas.” And for all of President Xi’s calls for action, it’s worth noting that other foreign attacks on Chinese citizens in recent years were downplayed by China’s state media. Over the past few days, social-media chatter urging China to defend its citizens abroad has, predictably, been deleted by state censors. Meanwhile, the relatives of Zhou, who was gunned down in Mali, have not had the heart to tell his elderly parents, living in rural Shandong province, of his death. “I really hate the terrorists,” says his nephew, Zhou Shengjun.

— With reporting by Yang Siqi and Gu Yongqiang / Beijing 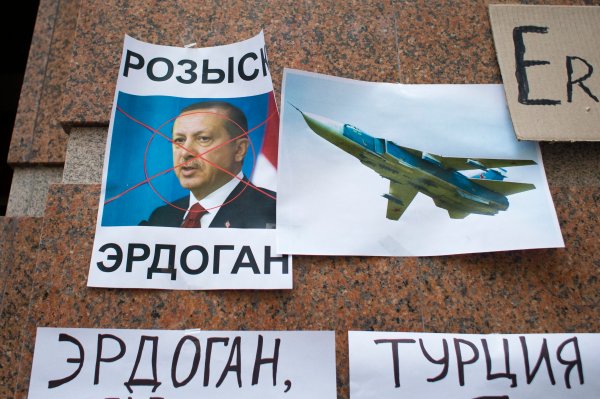 Turkey Releases Audio of 'Warning'
Next Up: Editor's Pick