A newborn baby boy who still had his umbilical cord attached was left abandoned in a manger in a New York City church’s nativity scene on Monday, police and members of the church said.

The full-term infant was wailing in the nativity’s crèche at the Holy Child Jesus Church in Queens when a custodian found him about 1:30 p.m.

“It was a bit of a shock, it doesn’t happen every day,” parish secretary Paul Cerni, 50, told TIME. “This tiny baby was obviously just born.”

The baby was wrapped in purple towels and placed next to the Virgin Mary in the wooden manger that was built about an hour before the discovery, the New York Daily News reported.

A woman was caught on surveillance video at a nearby store walking in with a baby and leaving without one, according to reports.

“I was in the church sweeping,” custodian Jose Moran, 60, told the newspaper. “I followed the cries. I walked to the little nativity home we had installed inside the church … I couldn’t believe my eyes.”

The healthy baby boy survived after being taken to the hospital and is now in custody of the Administration of Children’s Services, police said.

The newborn, who is being called “Baby Jesus,” weighs 5 pounds and 6 ounces, according to the New York Post.

“It’s a kind of a blessing that the mother left him there,” Cerni, 50, said. “The baby was safe. It’s pretty amazing.”

Police are still looking for the person responsible for discarding him. 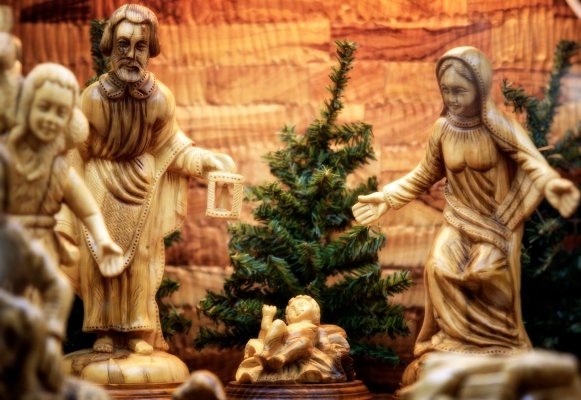 Newborn Found in Manger of New York Nativity Scene
Next Up: Editor's Pick