The good: Open environments tuned for exploration, fun puzzles and optional challenge areas
The bad: Absurd endgame, unimaginative story
Bottom line: A series of sublime trials that make for an exemplar of the action-adventure genre

By the game’s close my people-plus snuffed tally was 664. That’s quite the body count—in the vicinity of a battalion’s worth, to use a military term. And military terms best describe how things work when the high-efficiency firearms come unholstered. You are literally an army of one, simultaneously schlepping multiple bows, rifles, shotguns, handguns and a jugular-gashing climbing axe the envy of any horror film repurposed run-of-the-mill tool.

This is what you talk about when you talk about gaming these days, singling out a narrative tendency to trip over shoelace-tied gameplay, the shoelaces being the ongoing war between player freedom and “Yeah, I could see this actually happening.” Not that anyone’s lobbying for realism in these games, it’s just become vogue to note the disparity, say, between a hero who’s pitched as more or less ethical, and the trail of corpses she leaves in her wake. Lara Croft is Rise of the Tomb Raider‘s badass with the moral high ground, except she’s also a butcher on a truly outlandish scale.

It’s a measure of how much Rise of the Tomb Raider gets right then, that I spent a fraction of my playtime relishing Lara’s arsenal of misery, training gunsights on dim ski-masked villains, or creeping up behind others to axe-stab them senseless. Most of the “2d 17h 5m” the game reports I spent playing it to completion involved doing what I love most in these kinds of part-action-but-mostly-adventure games: fighting nothing at all.

That was time spent dangling from grappling lines tenuously tethered to shimmering walls framing glacial cathedrals, nothing but the sound of Lara’s labored breathing or the crunch of her climbing tools connecting with ancient ice. It was time given over to elaborate “challenge tombs”—optional side areas like the booby-trapped temple at the start of Raiders of the Ark, each a study in the art of not repeating puzzles or level design.

And it was untold hours devoted to inspecting every cliffside corner of the game’s vast and pitiless Siberian snowscapes and forests, enamored with its network of extractable resources, its little troves of oil and magnesite ore and deer antlers and byzantine coins, all used to craft or purchase an array of improvements to rival the recipe system in Ubisoft’s Far Cry games.

By contrast, the story in this followup to developer Crystal Dynamics’ 2013 Tomb Raider reboot—Lara’s first non-accidental adventure and outing as a seasoned protagonist—tries but never quite manages to rise above its B-movie grail quest pedigree. There’s a sort of Indiana Jones and the Last Crusade child/parent “anxiety of influence” dynamic at the outset that seems promising, but it’s relegated to Lara’s plaintive recollections about her absent archeologist father, and only casually explored.

No matter. Writer Rhianna Prachett’s yarn about a MacGuffin that grants eternal life stashed in the mythical Russian city of Kitezh moves you between its set pieces ably enough. And it’s the set pieces that resonate once the cutscenes conclude and you’re free to roam, pitting yourself against some force of nature or other, each area daring you not to abandon the so-called main quest and work your way, say, through an ice crevasse that harbors an ancient warship, or scurry over the jungle-gym-like industrial girders of an abandoned Soviet installation pinpointing every last document, relic and resource. Here it really is the journey, not the destination.

By the time you reach that end, toting a private militia’s worth of weaponry, you’re yanked from your explorer’s reverie into the sort of predictable run-and-gunnery we’ve come to accept from these games when they run out of better ideas and settle for trotting out waves of bad guys, mini-bosses and in this case one completely absurd boss battle. Yes, the gunplay’s well done, so if that’s what you’re into, consider it the cherry on top.

But when you’re roaming the wilds alone and unhurried, Rise of the Tomb Raider doesn’t feel like a game about shooting people, much less questing for the holy whatzit of life extending awesomeness. It becomes a series of sublime trials that feel more like the insane feats of survivalism you might find chronicled in a Jon Krakauer book. Play the game on those terms, accepting its dalliances with rote gunplay, and you’ll experience it as I did: as one of the best things I played all year.

There’s a moment sandwiched between bursts of combat where the game does something unexpected. A magnifying glass appears, the same one that indicates the presence of a collectible item. I tap it. But instead of plucking something from the earth, Lara sits in a chair, her hands lightly tented, shoulders hunched, head down, the rain falling softly, the horizon aglow with firelight from buildings the enemy’s devastated. For the half minute or so it lasts, the game almost seems broken, ignoring my input, willing Lara to sit in the game’s sole seat, as if Lara were suddenly aware and stubbornly contemplating her actions. In the end it’s maybe nothing, but for me, a moment of reflection—an echo of those other, better moments’ contemplative quietude. 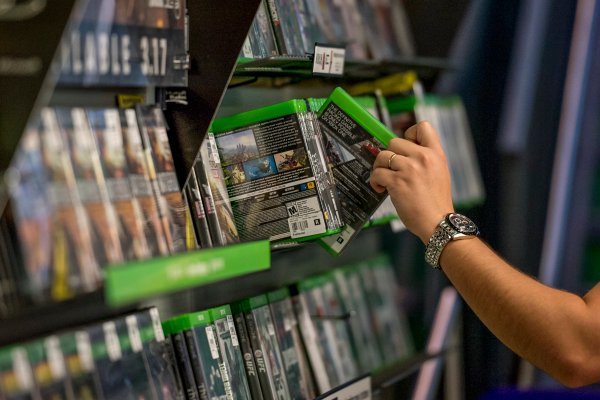 Now Is a Great Time to Buy a PlayStation 4 or Xbox One
Next Up: Editor's Pick