Following a stint on Breaking Bad and a starring role on the comedy Don’t Trust the B— in Apartment 23, Krysten Ritter is breaking ground in Marvel Studios’ first female superhero show, Jessica Jones, now available to stream on Netflix. Ritter spoke to TIME about the milestone, why she likes playing a character with PTSD and her input on Jessica Jones’ outfits. (Spoiler: You will never see her fighting crime in too-tight jeans or heels.)

TIME: I know Marvel is super-secretive. What was the audition process like?

Krysten Ritter: I didn’t have access to a whole lot before I went in. In fact, I had pages with different character names on them. After I auditioned with the casting director, I had a sit down where they told me what the show was about and who the character was, and then at the end of the meeting I asked if I could read the script. They put me in a windowless room and closed the door and confiscated my cellphone, and I read the first two scripts. I walked out and was like obviously, I have to play her.

There was a lot of competition for this role. What was your reaction to getting the part?

I answered the phone really cautious. I was terrified. When they told me I was Jessica Jones, I started screaming. Sounds came out of me, I don’t know if it made any sense.

And then I called my boyfriend who had just gone out of town that morning. He’s a musician so he was getting ear molds made for in-ear monitors. So I called him, but he couldn’t hear me and I just kept yelling louder, “I got the part!” Finally he was like, “I think you said you got the part.” We still laugh about it.

How familiar were you with the world of comic books before this show?

Actually Alias [the comic book upon which Jessica Jones is based] was my first time reading a comic book. And I loved them. The first word in Alias is “f—k.” And I was like, “Woah, this is something different. This is not what I expected at all.” Really great book, really great character.

You said that after reading the script you had to play her. What about the character was so compelling?

Well, she’s such a badass. I am rarely that surprised and wildly impressed with a script. The last time I felt that excited for a script was the pilot for Don’t Trust the B—. That was so funny and outrageous and over-the-top that I assumed it would never get on the air because it was too crazy. I felt that way about Jessica Jones because it was so much grittier than what you might think. The ends of all the scripts have you salivating for more. That’s really rare.

Jessica Jones is Marvel Studios’ first female superhero project. Did you feel any pressure to represent strong women in a certain way?

The material is really groundbreaking in its portrayal of a female superhero. It’s also just a great part for a woman—it’s a psychological thriller first and a superhero show second. So I always thought it was a big deal, but it’s not really my business to think about how people are going to analyze the character. If I thought about that stuff I would go crazy. So for me it’s about the character: this part is so dynamic and complicated that it’s like one of those parts you find in indies nobody will see.

I think studios make the assumption that men won’t watch female superheroes, and what’s refreshing about this is that it seems like that wasn’t a concern. It isn’t made insanely violent to appeal to men or cutesy to appeal to women. It’s just allowed to exist.

That’s the exciting thing about Netflix and the creator Melissa Rosenberg. She doesn’t write the show gender-first. She just approaches it with an incredibly flawed, complicated character. And Netflix isn’t trying to hit four quadrants. They let creators run with the idea they have and make the best version of that. They’re not all trying to make it appeal to a massive audience. I think having the Marvel mythology will appeal to a large audience—and that’s amazing—but the focus was always on Jessica Jones and what’s true to her and her world.

And you’re not as restricted as you would be on network TV in terms of language or violence. Did you like that aspect?

I love network TV, and there’s room for both. The thing about Netflix is that you get more minutes in your episode because there are no commercial breaks. You have time to let things breathe and be quiet. You get to see an entire scene play out instead of just jumping halfway in. There are a lot of times when Jessica Jones is alone in her house, and there’s no dialogue. She’s rough around the edges so getting to spend that time with her and see her be vulnerable and process the weight of her world is what makes the character so likable.

Your character has PTSD and every episode she has to relive these traumatic moments. Is that mentally tolling?

Yes, Jessica Jones lives in a pretty dark headspace, but, you know, this is the kind of work you always dream of doing when you’re an actress, something you can really sink your teeth into. I guess you could say it’s tolling, but I think that’s pulling focus from the fact that that’s what I do for a living. That’s the fun part. That’s the creatively rewarding part. That’s the stuff.

What was the process like training for the physical aspect?

I started training right away, and we’re not talking yoga and spinning classes, which is what I normally do. This is the kind of hardcore circuit training and boxing that 15 minutes in you want to throw up. I started doing all these things like pushups that I’d never done before. You have to get yourself into a physical condition so you can do all these stunts, and it also informed a physicality and because Jessica Jones is inherently strong in her person, not just physically. Having a sense of strength for myself helps me find her body.

How much input did you have in the character?

I had input on the wardrobe 100% because I rely really heavily on wardrobe, and that’s part of my character building—how it makes me feel, how it informs the physicality. So I’m very hands-on always with wardrobe. I really wanted Jessica Jones to have an iconic look that was instantly identifiable. Like, I told the costume designer early on that I wanted her to be a Halloween costume. If we can nail this down so perfectly that she’s instantly recognizable—it can be a Halloween costume—we’ve done her job.

I think we nailed that. I love the way she dresses, how simple it is. I didn’t want to show my figure or wear anything too eye-catching. I thought it was important to be practical. It’s hard to fight in high heels or even jeans that are too tight. You can’t kick in skinny, skinny jeans. And I don’t know about you, but I can’t walk in high heels. I literally wear them only when I have a red carpet to go to and take them off immediately afterwards. I can be in them for maybe 45 minutes and that’s painful. I just can’t do it. It kills my feet and hurts my back. So I’m all about practical shoes.

So her outfits mirror yours in some ways?

I always wanted her to—she doesn’t have money, so she doesn’t change her outfit everyday. I wanted her clothes to be on the floor and feel very real. I kind of dress the same way. I have a few things that I love. I don’t have a lot of clothes or a lot of possessions to bog me down. If I have a pair of jeans I wear everyday it’s because I love them, I’d be very bummed if I lost them. Also I don’t have a backup pair. So Jessica Jones is similar to me in that way.

Did you just reach a point in your life where you were like, I have too much stuff and need to become a minimalist?

The opposite because I’ve been working in this sort of vagabond, transient lifestyle for so long, all of my belongings need to be able to fit into a suitcase or two. I’ve always kept my load pretty light. Now I have a house so I’m acquiring more things, but my favorite afternoons are when my girlfriends come over and purge my closet. I give them all my stuff.

Anti-heroes are very popular on TV. Would you categorize Jessica Jones as an anti-her0?

I’ve thought about this. I feel like we’ve been describing her as an anti-hero because she’s unorthodox in her ways, but I do think she’s a good person at her core. She’s trying to do good and protect the people that she loves. So I think she’s a hero, for sure. I think she’s just real original and goes about things in a misfit way. 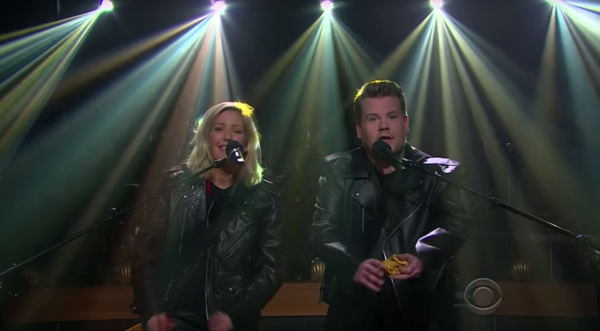 Ellie Goulding and James Corden Sing 'Love Me Like You Do' in 8 Different Genres
Next Up: Editor's Pick