How Much Weight Should You Really Gain During Pregnancy?

Kim Kardashian-West recently revealed on Twitter that she’s put on 52 pounds during her pregnancy—and still has 6 weeks to go until her due date. As with most things Kardashian, the Internet responded swiftly, with many calling her admission “refreshingly honest,” and others deeming her weight gain “dangerous.”

The truth is that every woman and every pregnancy is different, says Margaret Dow, M.D., assistant professor of obstetrics-gynecology at the Mayo Clinic—only a woman and her own doctor know for certain whether her weight gain falls within a safe range. That said, the CDC just released a report that found half of new moms surveyed in 46 states, New York City, and Washington, DC gained more than the recommended amount of weight while they were expecting.

Putting on too many pounds can lead to health problems for both mom and baby, including a higher risk for C-sections, gestational diabetes, and pre-eclampsia (dangerously high blood pressure). A mom’s weight at the time of birth can also influence her little one’s risks for conditions like diabetes and obesity later in life.

So why are so many women packing on too much? “Unfortunately it is a cultural phenomenon around the world that women during pregnancy should eat anything and everything that they want,” says Fahimeh Sasan, DO, an associate professor of obstetrics and gynecology at the Icahn School of Medicine at Mount Sinai.

Dr. Dow agrees. “We’ve all heard that you need lots of extra nutrition when you’re pregnant,” she says. “That’s partially true, only more along the lines of eating like a professional athlete than eating like a high-school wrestler.”

In reality, expectant moms only need 250 to 300 extra calories a day, and the quality of those calories counts, she says: the extra food would ideally be fruits, vegetables, healthy fats, and whole grains, not sweet or salty treats.

“It can be tough,” she admits. “Cravings and fatigue and nausea and all those factors provide an extra challenge, but the thrill of starting your baby off right can trump all of that if you stay focused.” Dr. Dow adds some women worry that exercise harm their baby—a myth that’s been debunked, but has stuck around—and so they cut back, or stop altogether.

What’s more, many women fail to realize how hard it can be to shed that extra weight after birth. In fact, slimming down post-baby may be tougher for moms today than women from previous generations. “Many of our mothers—and perhaps more so grandmothers, these days—were home, chasing after three kids under 6 and doing all the housework and other physically demanding work,” she says. “Current new moms are often home for 6 weeks, then back at a desk job. It’s an entirely different paradigm.”

Still, shaming women isn’t the answer. How much weight a woman gains should be nobody’s business besides her’s and her doctor’s, Dr. Dow says. It’s also not a good idea to compare your own pregnancies to others—including Mrs. Kardashian-West’s. “The Kardashians may have 24/7 access to a personal trainer to lose it all, but most of us don’t,” she says.

Even women who aren’t celebrities are often subject to unsolicited comments and judgement about their weight and appearance during pregnancy. “I tell my patients to ignore what people tell them,” Dr. Sasan says. What’s most important, she adds, is for women to maintain open communication with their OB/GYN.

“Pregnancy is a time when women really do think beyond themselves and their focus becomes about the health of the baby,” she says. “Once we have the conversation about the risks of weight gain, they feel empowered and don’t listen to all the chatter as much.” 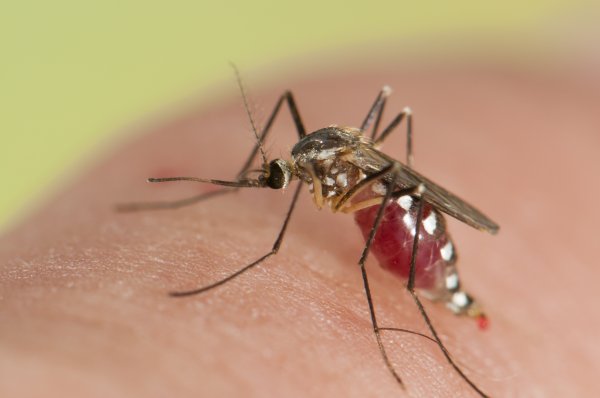 Researchers Have Created Malaria-Resistant Mosquitoes
Next Up: Editor's Pick