What to Know About Thanksgiving Travel This Weekend

Traveling for Thanksgiving? Make sure to pack your patience.

Longer delays at airports and snowstorms in some parts of the country are slated to snarl traffic as more than 46 million people are expected to hit the road during the busy holiday weekend.

Increased terrorist threats have also forced federal officials on Monday to issue a worldwide travel alert, calling for Americans to be cautious as they make their way to family and friends.

The U.S. State Department warned of potential attacks from the Islamic State of Iraq and Greater Syria (ISIS) and other groups, citing “current information” that suggests the extremists may launch assaults in “multiple regions.”

“Authorities believe the likelihood of terror attacks will continue as members of ISIL/Da’esh return from Syria and Iraq,” the agency said, using other names for ISIS. “U.S. citizens should exercise vigilance when in public places or using transportation.”

The alert comes after at least 130 people were killed in Paris earlier this month during a wave of violence coordinated by ISIS terrorists at a concert hall, restaurants and outside a soccer stadium.

The State Department said there would be additional security screenings and “unexpected disruptions” until the travel alert expires in late February 2016.

Nearly 50 million Americans will journey 50 miles or more from home this weekend, according to AAA Travel and most of them are getting around by driving, the organization said.

Those who are driving save some money at the pumps as the national average is predicted to fall to below $2 per gallon, the lowest prices for Thanksgiving weekend since 2008.

That’s the highest number of Thanksgiving travelers since 2007 and a spike of 300,000 over the last year, the nonprofit auto group said.

Los Angeles International Airport (LAX) will be the busiest among all U.S. airports this Thanksgiving with a record-breaking 2.1 million passengers, LA Mayor Eric Garcetti said.

Whopping passenger numbers are also predicted at Dallas Fort Worth International, with nearly 1.9 million customers, and Denver International Airport expects to fly out more than 182,000 people on Sunday, a record-setting travel day, according to airport officials.

Airfares are also projected to dip 10 percent this weekend, according to AAA. The average round-trip across the top 40 domestic flight routes is $169, the group said.

Those making the trek to the Northwest and Central states should be sure to pack clothes for chilly weather and rain gear.

Parts of Montana and Wyoming are watching for possible blizzard conditions by Wednesday or at least a few inches of snow, according to AccuWeather.

The inclement weather could cause slippery road conditions, experts warned. 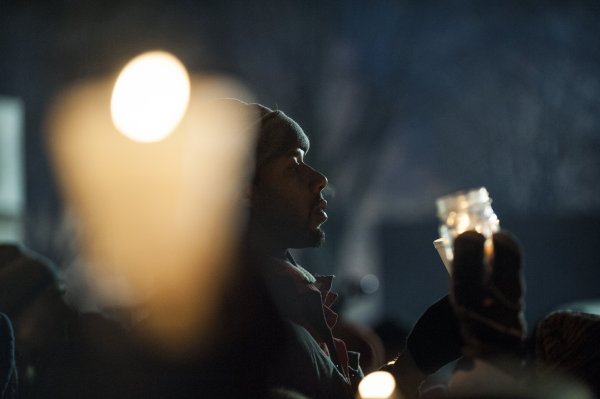 2 Arrested for Shooting at Black Lives Matter Protest
Next Up: Editor's Pick