These Are the Best Black Friday Deals in Tech

If you’ve been eyeballing a new PlayStation 4 or HDTV, this is the week to buy it. The biggest shopping holiday of the year, Black Friday, is almost here — and everything from gaming consoles to TVs to headphones and smartphones will be on sale.

Retailers such as Amazon, Best Buy, Walmart, and Target are already offering massive sales even though Nov. 27 is still days away. Keep in mind that some outlets, such as Amazon, will be changing their deals leading up to Black Friday, so it’s important to check back regularly.

Here’s a look at some of the most compelling tech and gaming deals that have been announced so far.

If you’re looking for a large-screened premium TV for your living room, you can snag one of Samsung’s 2015 TV models for less than $1,000 this holiday season. The TV, which supports 4K resolution and can run apps without a separate set-top box, is usually priced at $1,500.

Those seeking a high-end TV that can run apps but want something a bit cheaper, you may be interested in this deal. Sharp’s 50-inch TV has Roku’s platform built in, and usually sells for $499.99.

If the 50-55-inch range is too large for your living room or bedroom, there are some smaller models on sale as well. Hisense’s 2015 Roku Smart TV is selling for $50 cheaper than usual through Amazon.

Don’t need a smart TV? Walmart is advertising deals on standard 1080p TVs for just $149. The retailer hasn’t specified which brands in particular will be on sale just yet.

Roku has released a special edition set-top box that only costs $25. It’s not as powerful as Roku’s more expensive models, but it’ll do if you just need something cheap that can run Netflix, Hulu, and other apps on your TV. It’ll be available in limited supply starting Nov. 26.

The Google Chromecast will be on sale for $15 cheaper than it’s usual price at Walmart. The Chromecast is a dongle that plugs into your TV and allows you to cast apps and websites from your phone to the big screen.

Amazon is offering its touchscreen 6-inch Kindle for a $30 discount off its normal $80 price. The company says it can hold thousands of books and that its battery lasts for weeks.

Best Buy is selling laptops that run Microsoft’s Windows 10 operating system for just $250. Be warned — these devices from Asus and Acer run on Intel Celeron processors, which means they won’t be as speedy as those powered by Intel’s series of Core i processors. However, for $250, these laptops will be powerful enough for those that just need a computer for writing papers, checking email, and getting online. They also come with 500GB of storage space and 4GB of memory. It’s a good deal considering most laptops priced at around $250 usually run on Google’s Chrome OS, which is more limited than Windows 10 and can’t do much without an internet connection.

Those looking for a nice high-end Android tablet that’s comparable to the iPad, Samsung’s Galaxy Tab S2 is the device to get. The tablet is thin, light, and has a gorgeous 2,048 x 1,536 resolution screen. Target is selling the tablet for a decent discount — the larger 9.7-inch model is available for $400 versus its usual $500 price, and the 8-inch edition is on sale for $350 compared to $400 regularly.

iPhone and Samsung Smartphones for $0 Down

If you need a new smartphone and don’t mind committing to a carrier contract, Walmart has a compelling deal. Any Samsung smartphone and the iPhone 5S and higher will be available through AT&T and Verizon for $0 up front. That means you still need to pay off the phone through the carrier’s monthly payment plan, but there’s no immediate cost. Check the fine print in Walmart’s ad for more details.

The iPad mini 2 is a great choice for those who want a premium tablet with a nice screen that don’t necessarily care about having the latest model. It’s usually priced at $268, according to Walmart.

Amazon is selling the Xbox One for $68 less than it’s normal list price. The package includes the console itself, one controller, a headset, a power cable, and an HDMI cord. It comes with 500GB of storage.

Walmart is offering a bundle that includes the PlayStation 4 gaming console and Uncharted: The Nathan Drake Collection for $299. That’s $50 cheaper than its usual price.

Wii U Super Smash Bros. and Splatoon Deluxe Set for $249

Walmart is offering a very compelling deal on the Wii U: $249 gets you the console with Super Smash Bros. and Splatoon preinstalled. The discount is valid starting at 6pm on Nov. 26.

If you’re looking for a health-focused wearable to kickstart your New Years resolution early, one of Fitbit’s latest wristbands will be $30 cheaper through Walmart on Black Friday. In addition to tracking your calories, distance, and activity, the Charge HR also comes with a heart rate monitor.

The Withings Activite Pop tracks your fitness and your sleeping habits, but unlike other fitness bands it looks almost exactly like a normal wristwatch. Best Buy is selling it for $50 cheaper than it’s usual price in various color options.

Samsung’s latest smartwatch is available at a $50 discount through Amazon. It connects to Android devices to deliver notifications and apps to your wrist. What makes the Gear S2 stand out from other Android smartwatches is that it comes with a circular bezel that you can rotate to navigate around its interface.

Speck’s line of Candy Shell smartphone cases are selling for $9 compared to their $27.88 standard price. The cases are available for the iPhone 5c, iPhone 5s, iPhone 6, iPhone 6s, iPhone 6 Plus, iPhone 6s Plus, or Samsung Galaxy S6.

If you don’t want to drop a ton of cash on a new pair of wireless headphones, you might want to check out Amazon’s deal. The company is offering a pair of Photive sports headphones for a quarter of its usual $99.95 price. 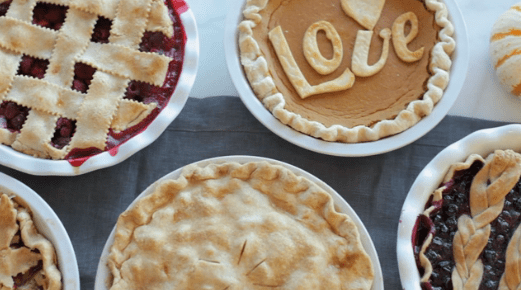 5 Ways to Top Your Pie
Next Up: Editor's Pick