What to Know About the Deadly ISIS vs. al-Qaeda Rivalry

One was an American public health expert working on women’s health and HIV. Six were employees of a Russian airline. Three were Chinese railway executives. Another was an official with the Belgian parliament. One was an Israeli educational worker. Six were Malians.

The 20 victims of the armed assault on the Radisson Blu hotel in Mali’s capital Bamako on Nov. 20 included a cross-section of international visitors to this West African country. According to multiple reports, the gunmen separated Muslims from non-Muslims by demanding they recite verses from the Quran.

The siege at the hotel followed an uptick in attacks by militants in Mali, including groups that denounced the country’s fragile peace accord. But the digital aftermath of the assault on the hotel illustrated an ongoing rivalry between al-Qaeda, other assorted jihadist groups, and the militants of ISIS, who have pioneered their own brand of indiscriminate killing.

In contrast to the wholesale slaughter of civilians in Paris and Beirut a week earlier—by suicide bomb and assault weapon—the killings in Bamako typified the somewhat more targeted approach to terrorism professed by al-Qaeda, whose leaders have said that they disapprove of ISIS’ indiscriminate tactics. Al-Qaeda supporters expressed their admiration for the attack online.

While the killing in Mali unfolded, one al-Qaeda supporter wrote online that ISIS “should learn a thing or two” from the gunmen in Mali. Another supporter posted: “Lions who carried out #MaliAttack separated Muslims from Christian in order2 protect the inviolable blood of Muslims.”

The sparring between al-Qaeda and ISIS over tactics is just one front in a much larger struggle within the jihadi universe in which the two networks compete for funding, prestige and recruits. It is a fight that ISIS had been winning decisively prior to the attack in Mali. By seizing and controlling huge chunks of territory in Syria and Iraq—and proclaiming a “caliphate”—ISIS had supplanted al-Qaeda as the preeminent force in the international jihadist movement.

The caliphate provided ISIS with a territorial base for training, governing and extracting resources (in the form of oil, wheat, taxation and extortion) on a scale al-Qaeda has never come close to achieving. The group has also succeeded in building an army of fighters from across the world, many of them drawn through online recruitment efforts. ISIS’ online presence is bigger and far more sophisticated than al-Qaeda’s, including social media campaigns that sometimes produce tens of thousands of posts in a day, propaganda videos with high production values, and intensive efforts to recruit individual followers across the world.

The killings in Bamako were claimed by an al-Qaeda splinter group called Mourabitoun, which was founded by the Algerian militant Mokhtar Belmokhtar. According to some reports, the group acted in concert with al-Qaeda in the Islamic Maghreb, an al-Qaeda franchise operating in the Sahara and Sahel regions. Separately, a new Malian group called the Macina Liberation front also claimed responsibility for the attack. French Defense Minister Jean-Yves Le Drian said it was “likely” that Belmokhtar’s group was behind the attacks.

Mali Will Mourn for Three Days After Hotel Siege

Scenes From the Aftermath of the Mali Hotel Attack

If that all seems confusing, it is, even for experts who study international jihadism. The relationship between Mourabitoun and al-Qaeda remains murky. The group’s founder, Belmokhtar, split with al-Qaeda in 2012 after he was rebuked by the al-Qaeda leadership for being uncooperative. Further complicating matters, the U.S. claimed to have killed Belmokhtar in an airstrike in Libya in June, although his death was never confirmed.

The attack in Mali underscored the possibility of an unpredictable and bloody scenario in which multiple jihadist groups and sub-groups around the world compete for notoriety and resources, in a possible contest of who can kill more and more creatively. In its own attacks ISIS appears to rely a loose network of militant cells, including foreign fighters returning to their home countries from Syria and Iraq. Those cells may plan and execute attacks with the approval of ISIS’ leaders, but with with little direction from the central command in Syria and Iraq. It was ISIS’ local franchise in Egypt that claimed to have bombed a Russian passenger jet on Oct. 31, killing 224 people.

“They’ll banner under one network or the other, but I feel like it’s way more loose and way more self initiating than it was 10 years ago,” said Clint Watts, a fellow at the Foreign Policy Research Institute, a think tank in Philadelphia. “From a counterterrorism standpoint it’s like a giant pile of spaghetti. Which noodle are you going to pull on and run with? It’s a capacity problem and it’s a triage problem.”

Both ISIS and al-Qaeda have killed now civilians in terror attacks on a large scale. Al-Qaeda, while it may now claim to be more careful in its targets, has engaged in indiscriminate killing in the past, including the September 11 attacks, which killed nearly 3,000 people. But al-Qaeda faced a strategic and tactical turning point during the bloody insurgency against the U.S. occupation of Iraq. Between 2003 and 2006, the man who became al-Qaeda’s leader in Iraq, Abu Musab al-Zarqawi, presided over a devastating series of suicide bombings that killed numerous Iraqis, particularly Shiite Muslims (al-Qaeda’s followers are primarily Sunni). The campaign marked the embrace of an extreme sectarian worldview that labeled Shiites as apostates.

While al-Qaeda leaders expressed a desire to impose some limits on the use of violence and focus the fight on non-Muslims, ISIS seemed to embrace brutality and sectarianism as a selling point. The group has captured world attention with propaganda videos depicting grotesque scenes of killing, including footage of hostages beheaded and burned alive. Analysts have described those videos as an attempt to “outbid” its militant competitors in a tournament of cruelty.

In recent months, the two groups have engaged in a propaganda battle, each assailing the other over strategic and doctrinal differences. Al-Qaeda and its affiliates recently lashed out at ISIS for targeting Muslims. In a video released in the name of al-Qaeda branches in North Africa and the Arabian Peninsula that surfaced before the Paris attacks, the militants accused ISIS of “deviation and misguidance.”

On the other side of the divide, ISIS accuses al-Qaeda of lacking purity when the group forms alliances with local forces and insurgent groups in Yemen, Afghanistan, Syria and elsewhere. The most recent edition of an online ISIS publication called Dabiq, written in English and released following the Paris attacks, includes an entire article critiquing al-Qaeda for allegedly forming alliances with former agents of the Yemeni government.

The attack in Bamako took place in the context of ongoing political conflict in Mali, where transnational militant groups operate among a range of local groups. The attacks came after leaders recently called for violence in response to a peace accord signed in June.

“It does seem from the outside that roots of these attacks are Malian, and they’re rooted in what’s happening in that country,” says Michael Wahid Hanna, a fellow at the Century Foundation and an adjunct senior fellow at the Center on Law and Security at New York University.

Nevertheless, the rivalry among jihadists could be one of the dynamics driving future violence across the world. “The most dangerous scenario isn’t two big things,” says Watts. “It’s 15 little things running wild all over the world.” There is mounting evidence of the potential for a competition in which ISIS, al-Qaeda, their affiliates, and individuals inspired by the those groups attempt to match or surpass one another’s acts of killing. In the short term, one group may succeed in attracting more recruits and funding, more praise from their online acolytes. But in the long term this is a contest with no winners, only losers, the victims. 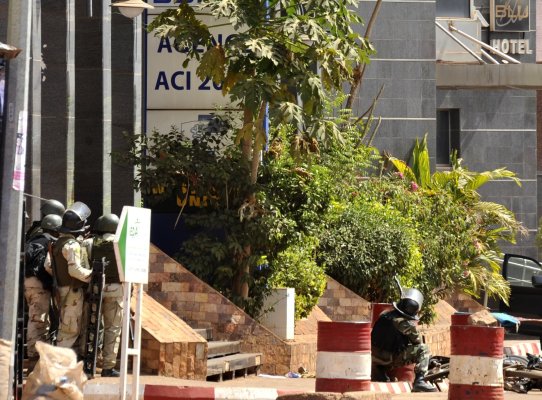