Here's What That 'UFO' Spotted From the Space Station Really Is

It was just at the end of the space station’s work day that the vast conspiratorial secret slipped out, when astronaut Scott Kelly, who is two-thirds of the way through his marathon one year in space, sent out this tweet:

Beautiful stuff, but nothing special for Kelly, who has been posting pictures on Twitter, Facebook and Instagram his entire time aloft. But this time, it appears he got careless. Take a look at the upper right hand corner of the picture. Yep, right there—that glowing object with a bright light at either end. UFO!

Certainly, that’s the conclusion of Scott C. Waring, editor of the blog UFO Sightings Daily, who not only knows an alien spaceship when he sees one, but can determine its construction and dimensions. “The UFO is about 25 meters long and 150 to 200 meters away,” he wrote. It is, he further described, cigar shaped with a metallic body.

Well, yes. That’s one explanation. Another one—admittedly a bit more prosaic—is that the “UFO” is a reflection off the space station window. Even likelier is that it’s an overhanging piece of the station itself that happened to catch a bit of light. The ISS is larger than a football field, with solar wings, experimental platforms and habitation pods hanging off of it in all directions. It’s actually not all that easy to get a clear shot without some piece of hardware getting in the way, as this tweet from Kelly on Nov. 12 shows.

Just which piece of the station happened to be glinting back at Kelly’s camera while the rest was in shadow is impossible to say, but a smart story on Forbes makes a strong case that it’s the High Definition Earth-Viewing System, mounted on the exterior of the European Space Agency’s Columbus module. The HDEV includes several HD cameras enclosed in two temperature controlled canisters that are, not incidentally, covered in reflective material.

So, mystery solved—for now. But this was not the first time there was chatter in the tin-foil-hat community about astronauts and E.T. making common cause. In 1962, during John Glenn’s historic three-orbit mission, ice crystals that had been clinging to the exterior of his ship broke loose and swarmed about, reflecting sunlight back at him. Glenn referred to them as fireflies—giving rise to all manner of rumors about their supposedly alien origin.

In 1965, when Frank Borman and Jim Lovell went aloft aboard Gemini VII, one of their exercises was to try to keep pace with the spent second stage booster that had helped put them in orbit. Borman took to referring to it as a “bogey,” which is pilot-speak for an enemy aircraft. And that got things stirred up again.

“We referred to it as a ‘bogey’ all the time, which was natural, normal parlance for it,” said Borman in a NASA oral history. “And when we got back, True magazine wrote a big story about how we’d been tracking a UFO and all that nonsense. So I’ve been plagued with that ever since.”

Still, there was one time that an American astronaut did radio down a direct report of a UFO. The astronaut was Tom Stafford, who was aboard Gemini VI, which went into orbit at the same time as Gemini VII so that the two spacecraft could practice rendezvous maneuvers. Stafford was very explicit about what he was seeing.

“We have an object,” he radioed down. “Looks like a satellite going from north to south, probably in polar orbit. Looks like he might be going to re-enter soon. I see a command module and eight smaller modules in front. The pilot of the command module is wearing a red suit.”

And the next thing NASA heard was a tiny but unmistakable rendition of Jingle Bells, played on a miniature harmonic and a set of bells. It was Dec. 16, the heart of the Christmas season, and Gemini VI commander Wally Schirra, who had smuggled the instruments aboard, reckoned the occasion ought to be marked in some way.

The bells and the harmonica are now displayed in the Smithsonian’s Air and Space Museum. The other alien sightings—including Kelly’s—are unlikely to find so conspicuous a place in history. 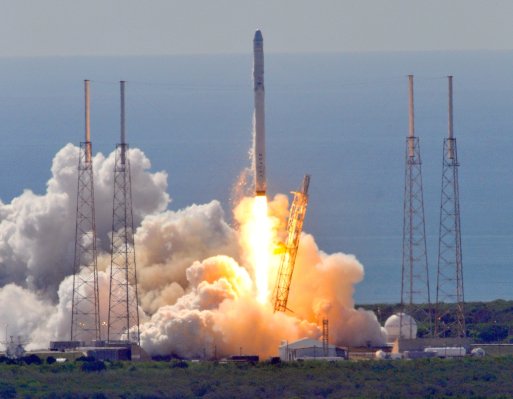 SpaceX Will Officially Carry Astronauts to the Space Station
Next Up: Editor's Pick