Foreign policy remains the topic of the moment, more than a week after the attacks in Paris, as voters remain fearful of a similar attack in the United States. President Obama returned early Monday from an 8-day around-the-world trip to a country divided over taking in additional Syrian refugees, and faces the tough task of reassuring the American people that his decision to hold his anti-ISIS policy steady is the best course of action. Republican candidates doubled-down on their opposition to refugees without further enhanced screening measures this weekend, as Donald Trump started a new firestorm when he repeated a familiar—and debunked—claim that Muslims in New Jersey cheered the 9/11 attacks. Ben Carson, under pressure for his seeming unfamiliarity with a range of complex international issues, is contemplating a foreign trip in the coming weeks in hopes of bolstering his credentials. The move, so close to the Iowa caucuses, reinforces both his confidence in grassroots army, and the degree to which the race has refocused around foreign policy. Marco Rubio released his first television ad of the cycle to drive home a foreign policy message.

Hillary Clinton is slowly releasing new tax proposals aimed at the middle class, but she hasn’t yet offered a vision of how to pay for it. The roll-out is a classic tactic used in both parties, to score political points with high profile and popular releases, and then get around to the complicated—and controversial—task of paying for them in a more subdued setting later.

Ted Cruz is seeking to slightly moderate his positions in order to broaden his appeal, condemning his rivals’ immigration rhetoric and leaving open the door to a potential pathway to legal status for the 11 million people in the U.S. illegally. The move comes as the Cruz-Rubio war is intensifying as the two senators see each other as their largest obstacle to the nomination.

LGBT leaders warn of a backlash. Trump defends supporters who kicked and punched a protester. And fact-checking the claim that most Syrian refugees are of fighting age.

Ted Cruz Won’t Rule Out Legalization for those in U.S. Illegally
Says “conversation” can take place after border is secure [TIME]

With Ben Carson, the Doctor and the Politician Can Vary Sharply
A detailed surgeon, who struggles with the details as a candidate [New York Times]

“Maybe he should have been roughed up, because it was absolutely disgusting what he was doing. I have a lot of fans, and they were not happy about it. And this was a very obnoxious guy who was a trouble-maker who was looking to make trouble.” — Donald Trump on Fox News Sunday on his supporters violent’ treatment of a protester

“Instead of getting rid of John Kerry, I’d like for Barack Obama to resign if he’s not going to protect America.” — Mike Huckabee ratcheting up his rhetoric on Obama on Friday in Iowa 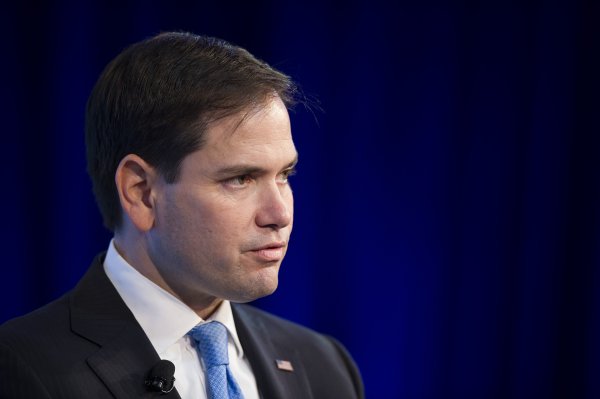