In the wake of the terrorist attacks in Paris, 31 U.S. governors now oppose the resettlement of Syrian refugees in their states. On Last Week Tonight, John Oliver described this as “pretty extreme, but also pretty meaningless” due to the fact that governors actually don’t have that power, as well as the fact that Syrians could simply walk across state borders, which Oliver noted “are not crocodile-filled moats.”

This past week, however, the House of Representatives passed a bill calling for tougher screening procedures for Syrian refugees, including requiring that the FBI director personally sign off on each and every one of the 10,000 refugees President Obama has pledged to accept over the next year. While the bill will most likely be vetoed, Oliver decided to spend a portion of his final show of the season to explain the intensive vetting process that Syrian refugees must go through. (TIME has also laid out in great detail here.)

“You’ll be put through security screenings by the National Counterterrorism Center, the FBI and the Department of Homeland Security, and if you’re a Syrian refugee, you’ll get an additional layer of screening called the Syria Enhanced Review, which may include a further check by a special part of Homeland Security — the USCIS [United States Citizenship and Immigration Services] fraud detection and national security directorate,” explained Oliver. “And don’t relax yet, because we’ve barely even started.”

According to Oliver, “Every generation has had its own ugly reaction to refugees, whether the Irish, Vietnamese, Cubans or Haitians, and those fears have been broadly unfounded. In fact there was only one time in American history when the fear of refugees wiping everyone out did actually come true — and we’ll all be sitting around a table celebrating it on Thursday.” 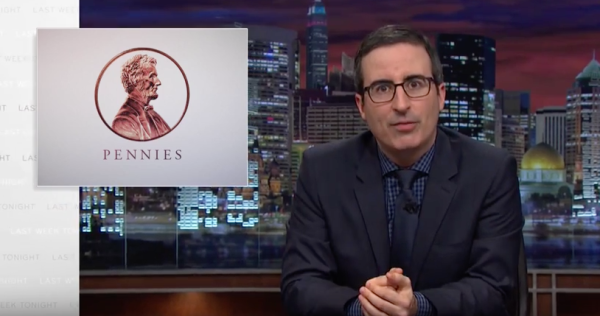 John Oliver Calls for a Small Change — an End to the Penny
Next Up: Editor's Pick