The gorgeous couple tied the knot Sunday during a romantic wedding at The Breakers Resort in Palm Beach, Florida.

Vergara, 43, who recently admitted she had a little bit of “bridezilla” in her and is very detail-oriented, pulled out all the stops for the nuptials. The festivities included a weekend full of fun, including a pool party, a sumptuous rehearsal dinner and a pre-wedding bash that included Manganiello serenading his bride-to-be with “Sweet Child O’ Mine.”

At the Sunday ceremony, Vergara wore a custom Zuhair Murad Couture design as she walked down the aisle. The ceremony was indoors, inside a small area decorated with white roses, orchids and hydrangeas. The actress went without a veil and carried a bouquet of orchids.

Instead of exchanging the typical “I dos,” the couple instead said “I will” in front of a minister and members of the wedding party read passages from the Bible in both Spanish and English. Vergara and Manganiello also recited their own vows. The emotional ceremony included a lot of laughter and happy tears from the guests.

Vergara’s Modern Family costar Julie Bowen recently teased details of the wedding to PEOPLE at an award ceremony in Los Angeles, revealing that the “only thing” she knows is that couple chose not to do official wedding photographs.

“I love that because it says to me, ‘We’re not going to spend a lot of time on the traditional, we’re just going to get to the fun,’ ” Bowen said.

Manganiello, 38, proposed to Vergara on Christmas Day last year during a romantic trip to Kauai about six months into their relationship.

The two first linked up in July 2014, shortly after Manganiello raved about the Modern Family actress in an interview with PEOPLE for the Hottest Bachelors issue.

During an interview for PEOPLE’s Sexiest Man Alive issue, the Magic Mike XXL star revealed why he couldn’t wait to tie the knot, saying that the best part of getting married “was not having to change anything.”

“It was finding someone who complemented me perfectly,” he added. 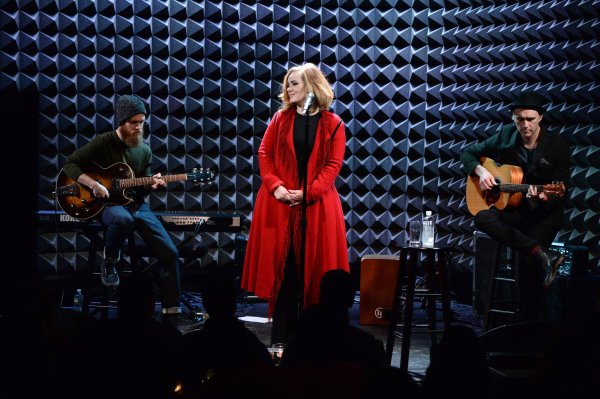 Watch Adele Save Thanksgiving on SNL
Next Up: Editor's Pick