Texas Sen. Ted Cruz declined to close the door to a potential pathway to legal status for the 11 million people in the U.S. illegally Friday, saying he wouldn’t elaborate on his plans for them until after the border is secure.

Seeking to carve out a space between real estate mogul Donald Trump, who is calling for the forcible deportation of those in the U.S. illegally, and Florida Sen. Marco Rubio, who co-authored the Gang of Eight comprehensive immigration reform bill that included a pathway to citizenship, Cruz would not explicitly rule out a pathway to legal status for the undocumented.

But speaking to reporters after a town hall event with Iowa Rep. Steve King, Cruz maintained that he’s been clear about where he stands, even though the immigration plan he released last Friday was silent on legalization.

“The only people I’m under fire from are reporters who want to throw rocks,” Cruz said. But Cruz acknowledged that his own plan only calls for a national “conversation” about those remaining in the country illegally, and is short of specifics.

“First we secure the borders,” Cruz said. “First we demonstrate that we can solve this problem so that the flow of those coming into this country will drop effectively to zero.”

Cruz told reporters that strengthening the E-Verify system, which allows employers to check the legal status of their employees, would reduce the numbers of those in the U.S. illegally, suggesting that many would leave the U.S. voluntarily if denied employment.

“If we put in place a strong E-Verify system and deport criminal illegal aliens, the number of people here illegally will drop significantly, particularly if there’s not a continual flow of people coming in illegally,” Cruz said.

“At that point, once we’ve demonstrated that we can solve the problem, then we can have a conversation about what to do about whatever people remain illegally,” Cruz added. When asked if that conversation included the potential for a pathway to legal status, he repeated, “We can have that conversation with the American people once we secure the border.”

In recent weeks, Cruz has sparred with Rubio over the 2013 immigration bill. Rubio alleges that Cruz supported legalization when he introduced an amendment to strip a pathway to citizenship from the bill. Like “immigration reform”, the term “amnesty” means different things to different people. Cruz has never defined it as including a pathway to legal status, though some on the right view that idea with suspicion.

“I am the only one on that debate stage who has never supported amnesty, and indeed who led the fight against the Gang of Eight massive amnesty plan that President Obama and Chuck Schumer and establishment Republicans pushed,” he added.

Read Next: What Rubio vs. Cruz Means 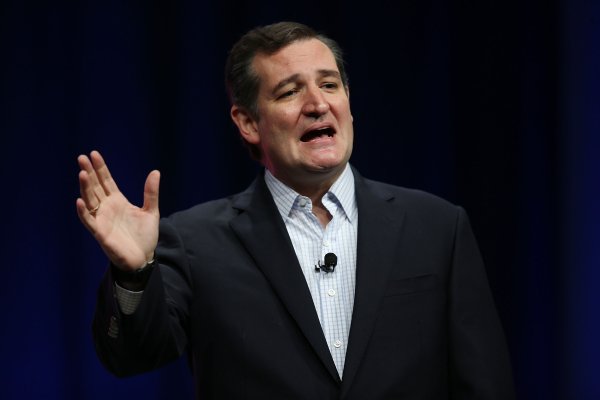 Ted Cruz Breaks With Donald Trump on Muslim Database
Next Up: Editor's Pick