If you’re a conservative who uses Facebook, you may have seen a recent ad from Texas Sen. Ted Cruz’s campaign.

“Mr. President – stop the insults and debate me anytime, anyplace on defending America,” it says. “Click If You Want Obama to Debate!”

Accompanying the sponsored post, which has received thousands of likes, is an image (seen at right) of the Republican presidential candidate wearing boxing gloves, lounging across from an empty stool labeled “Obama” in a boxing ring.

The ad refers to a very recent clash between politicians: President Obama’s criticism of Republican presidential candidates’ calls for barring or limiting Syrian refugees into the country in the wake of the Paris attacks.

But if the image looks familiar, that’s because it’s a direct reference to a much earlier moment in American political history and an illustration of another famous Republican, Teddy Roosevelt.

In June of 1904, Roosevelt was running for president, after serving out the term of assassinated President William McKinley, whose vice president he had been. A progressive, TR had successfully taken control of the Republican Party, especially after the death of conservative arch-rival Sen. Mark Hanna.

Puck, a humor magazine that often featured political satire, commemorated Roosevelt’s coronation at that month’s Republican convention with a cover featuring him lounging, well, puckishly, in an empty boxing ring, waiting for a Democratic opponent.

“‘Terrible Teddy’ Waits for ‘The Unknown,'” the caption read.

The Democratic convention wouldn’t be held until the following month, and its crowded field led to a contentious process.

Roosevelt ended up facing off against New York Judge Alton B. Parker, defeating him 336-140 in the Electoral College. 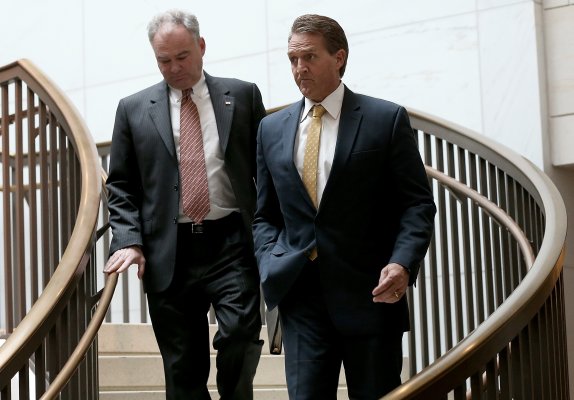 Congress Has Been Too Silent on ISIS
Next Up: Editor's Pick