Uncovering the Mysteries of Tax Optimization

An employee of “Jetpack Cayman” demonstrates this new watersport, now available on the island. A 2000cc motor pumps water up through the Jetpack, propelling the client out of the sea ($359 for a 30-minute session). Mike Thalasinos, the owner of the company, remarks, “The Jetpack is zero gravity, the Cayman are zero taxes, we are in the right place!” Grand Cayman.
Gabriele Galimberti and Paolo Woods—Institute
By Laurence Butet-Roch

To do justice to the work undertaken by Paolo Woods and Gabriele Galimberti, requires thinking of them not as photographers, but as investigators. Their search for truth begins with a mystery, one embodied in Ian Fleming’s Dr. No. “How do I possess that power, that sovereignty?,” asks the villain. The quote opens the pair’s recent book, The Heavens, which seeks to render intelligible the nebulous world of tax havens.

“I focus on power structures because they are harder to probe and to hold accountable,” says Woods. “They are the one that can afford to have a public relation machine that obscures the truth.” Prior to his inquiry into the offshore system, the 45 year-old Dutch-Canadian who grew up in Italy, considered what makes a state by studying the trials and tribulations of rebuilding Haïti post-earthquake (État, 2013), explored the hidden make-up of contemporary Iranian society (Walk on my Eyes, 2010), looked into how China took hold of Africa (Chinafrica, 2008), examined the role the U.S. played in the unraveling of Afghanistan and Iraq (American Chaos, 2004), and scrutinized the oil industry on four continents and twelve countries (Un Monde de Brut, 2003). “The role of journalists, and this should apply to photographers as well, is to look into what someone else does not want them to report on. As photographers we are often lazy and that stops us from investing in challenging and courageous stories. We also bow down to pressure from many media outlets to only produce ‘positive’ stories.”

Counter to this trend and true to his spirit, Woods next logical step was to take on tax havens. The idea emerged after Galimberti jokingly suggesting that he should hide his money in the Cayman Islands to avoid giving half of it to the Italian state. Knowing little about the process one goes through to protect his income from the hands of governments, the duo looked for clues in existing literature as well through the hands-on experience of setting up their own company, one they wittily called “The Heavens LLC”.

“For every story I’ve done, I’ve tried to find the most appropriate visual strategy,” says Woods. “As far as tax havens go, in most cases, articles were illustrated with the same photos of palm-tree fringed tropical beaches, which didn’t fully correspond to the images that were forming in my head as I was doing the research.” On the one hand, he was surprised to learn just how concrete the consequences are in everybody’s daily life. Through this system, for instance, a multinational buys a banana for 13 pence, sells it to some of its offshore divisions, each time elevating the price, until it reaches the wholesaler who purchases it for 60 pence. Yet, only the initial 13 pence are taxed, while the customer ends up paying his banana 1 pound. “People see tax havens as far removed, schemes that only concerns the wealthy, when in fact, we’re the ones paying the price,” says Woods. On the other hand, he was quick to note just how immaterial the whole system is.

The lobby of Ernst & Young’s headquarters in London. E&Y is one of the “Big Four” audit firms. It has 190,000 employees and more than 700 offices in over 150 countries. It is the third-largest professional services firm in the world by aggregated revenue. The “Big Four” (PwC, Deloitte, KPMG and E&Y) are often accused of being the backbone of offshore finance and aggressive tax avoidance strategies. They collectively audit 99% of FTSE 100 companies. City of London
Gabriele Galimberti and Paolo Woods—Institute

There’s rarely any exchange of actual pennies and dollar bills; all the trading happens through computer. Value is added artificially. Woods and Galimberti, found themselves with quite the challenge: show how intangible transactions performed by a few, have tangible effects on the many.

Keen to employ the same glossy tropes used by corporations in their annual reports, the two accomplices went on to create images that show what the places where billions of dollars are held look like, who the main protagonists are – head hunters, wealth managers, politicians, CEOs –, what activities they’re involved in – flying drones, playing golf, meeting in their glass towers –, interspersed with a few shots that capture the underbelly of these offshore paradise.

“We would write wish lists, send hundreds of requests asking to set up interviews and photo shoots. We never lied about what we were doing,” recalls Woods. Their method, using a large-format camera – obviously prevented them from acting covertly. When asked, they would explain their interest tax optimization – the corporate spin on tax haven -, which though might work in labyrinthine ways, are hardly a secret. “For instance, 70% of the British Virgin Islands GDP comes from the offshore financial industry. 60 000 people live there, which is not even the population of a borough of New York, yet it’s the second largest investor in China. In Hong Kong, to BVI is a verb,” he adds.

Thanks to their dark humor and their keen eye for the absurd, Woods and Galimberti make a very complex, dry and seemingly impenetrable subject, palatable without lessening its informative value.

“One of the most startling, and scariest, place we visited was the Singapore Freeport. It’s a gigantic building that houses the world’s fortunes. Situated just of the airport runway, it allows the rich to land, and directly stash their treasures without ever entering the country,” recounts Woods. “There, we spoke with a Swiss man who upon learning that we were from Florence, exclaimed: ‘We have more art here than in Florence’s Uffizi.’ Nothing that he, or his peers, are doing is illegal. The problem is that the law itself is wrong. Only by making people aware of this can we hope for structural change.”

Gabriele Galimberti and Paolo Woods are the author of The Heavens published by Dewi Lewis. 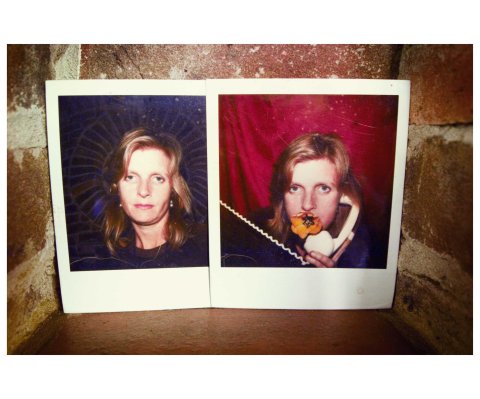 See Intimate Family Photos of the McCartney Family
Next Up: Editor's Pick