In attempt to widen the appeal of his brand of democratic socialism, Vermont Sen. Bernie Sanders on Thursday tied himself to the legacy of Franklin Roosevelt and called for far-reaching social programs to reduce income inequality.

For Sanders, the often rambling speech at Georgetown University was an opportunity to demystify the moniker of “socialist,” one which has enthused his supporters and repelled his skeptics.

“When I use the world socialist–and I know some people aren’t comfortable about it—I’m saying that it is imperative,” Sanders said, that we “create a government that works for all and not just the few.”

Democratic socialism, Sanders said, is not tied to any Marxist belief or the abolition of capitalism. “I don’t believe government should own the means of production, but I do believe that the middle class and the working families who produce the wealth of America deserve a fair deal,” he said.

Sanders use of the term “democratic socialist” has been both a weakness and a strength. He refused in the first Democratic debate in Las Vegas to call himself a capitalist, calling it a “casino” system, but has insisted he would not overturn the free market.

Rather, Sanders says, he wants to implement broad-based reforms, including free tuition at public universities, campaign finance reform and single-payer healthcare. “My vision its not just making modest changes around the edge,” Sanders said.

Roosevelt, one of the brightest stars in the liberal firmament, has often been invoked by the Democrats on the campaign trail this year. Hillary Clinton launched her campaign on Roosevelt Island and spoke to Roosevelt’s 1941 “Four Freedoms” State of the Union address. Former Maryland Gov. Martin O’Malley discusses the admiration his family had for Roosevelt.

Sanders’ promise to fulfill Roosevelt’s Second Bill of Rights, which set economic security and independence as a national imperative, is intended to appeal to Democratic primary voters.

Sanders plan would cost trillions of dollars over a ten-year period, and he has said he would raise taxes on the wealthy in order to pay for much of it. In addition to single-payer healthcare of the kind in Canada and European countries, Sanders calls for paid family leave for new mothers and a complete overhaul of election financing.

Sanders also abruptly delved into foreign policy at the end of his speech, saying the United States needs to lead a coalition to destroy ISIS and that Muslim allies in the Middle East have to step up their support.

Hillary Clinton has criticized Sanders for saying he would raise income taxes on the middle class in order to pay for single-payer healthcare. But Sanders has said his plan would greatly reduce financial burdens for families.

“Democratic socialism means that we must create an economy that works for all, not just the very wealthy,” Sanders said.

Read Next: A Small New York City Island Gets Ready for Hillary Clinton

A photo caption in the original version of this story misstated the party for which Bernie Sanders sought the 2016 presidential nomination. It was the Democratic Party, not the Republican Party. 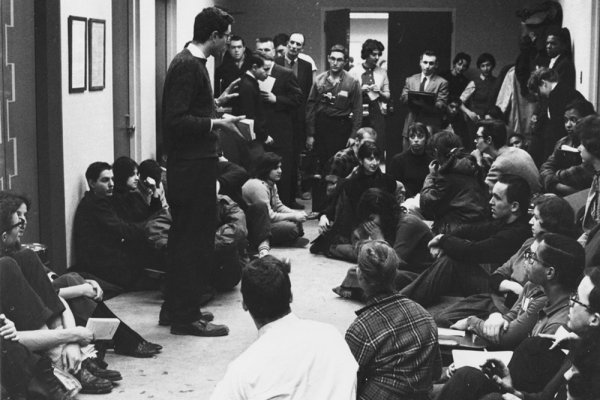