Carl Icahn’s bid to force online auction giant eBay to spin-off its payment processing business, PayPal, and eBay’s resistance to the idea once again highlights the disconnect that often exists between company shareholders and management.

It is widely accepted that companies should have only one goal, which is to maximize returns for investors. This works well for small and mid-size privately held businesses where senior managers often hold major ownership stakes and so the company’s interests are perfectly aligned with investor returns. It also works well for private equity sponsored deals where the investors play an ongoing and thoughtful role in the management of the company.

For large enterprises, however, and particularly public companies, the reverse can be true.

Contrary to popular belief, shareholders do not always hold a preferred claim to a company’s profits or assets. The rights of debt holders, employees, retirees, and even some large customers can supersede those of equity holders at different times and circumstances (such as bankruptcies). What this means is that CEOs tasked with running a company should focus as much on the preservation and growth of the business as on the maximization of shareholder wealth. In the free market system and in the long-term, the two will automatically coincide, even if in the short-term they diverge.

Unfortunately, executives at major companies today are under pressure to maximize returns for investors every quarter, or for activist shareholders looking to cash in quickly on some perceived opportunity, which can lead to hasty business decisions, poor strategic planning, and acquisitions or divestitures that backfire later. More importantly, they are compensated based on short-term price performance rather than long-term business feasibility, which can misalign the interests of both management and current shareholders with the true welfare of the company.

That is not to say that CEOs and Boards prioritize equity holders over other stakeholders and the best interests of the company in every case but the obsession with shareholder value can sometimes compromise a company’s innovation and strategic direction in favor of immediate profits. Recent examples of such myopic decisions include Blockbuster’s lost opportunity to transition to digital (thanks to Carl Icahn) and JCPenney’s failed makeover as a substitute for business strategy (thanks to Bill Ackman).

Another point to remember is that shareholders in public companies do not assume the liability of true owners. The legal structure of public companies and business insurance policies shield equity holders from the bulk of corporate liability, including from indebtedness and legal problems. This weakens shareholders’ claims to pure ownership of the company – since assets and liabilities should theoretically be two sides of the same coin. Conversely, lenders arguably could lose a lot more from poor performance and employees often have their entire livelihood invested in a company and so those stakeholders have at least some claim to ‘ownership’ as well.

Realistically, of course, we live in a capitalist society and our individual prosperity depends on it. Stakeholder capitalism, good as it sounds, is not necessarily the panacea for corporate woes nor any more fair than our existing system. The right and productive way to look at it is for companies to simply recognize the fact that nobody has a 100 percent entitlement to the rewards of a successful business, and to balance out the needs of different constituencies with the long term needs of the company itself.

Financial prosperity in the long-term depends upon many things, including risk-taking and strategy, and not just on meeting quarterly earnings projections, and if management needs to make decisions that prioritize the former over the latter, that is simply good business practice.

Sanjay Sanghoee is a political and business commentator. He has worked at investment banks Lazard Freres and Dresdner, as well as at mutli-strategy hedge fund Ramius Cowen. He has appeared on CNBC’s Closing Bell, MSNBC’s The Cycle, TheStreet.com, and HuffPost Live on business topics. He is also the author of two thriller novels. 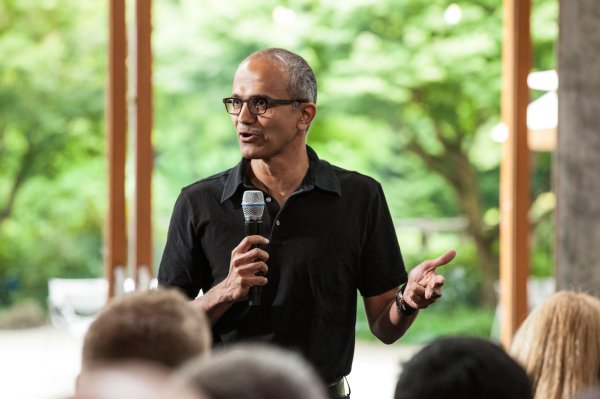 Satya Nadella Will Replace Steve Ballmer as Microsoft CEO
Next Up: Editor's Pick