Here's Everything You Need to Know About the Paris Attackers

Of the nine people believed to have been involved in Friday’s terrorist attacks in Paris, eight are now dead. Here is what you need to know about all of the suspects, including the one still at large, Salah Abdeslam.

Abdeslam, 26, is the brother of one of the suicide bombers in the Paris attacks. He was last spotted Saturday, when police stopped him at the French-Belgian border but then let him go after questioning, the Associated Press reports.

According to the New York Times, Abdeslam is French and has been living in Belgium. He is believed to have visited Syria and committed previous crimes. Abdeslam’s other brother, who is not believed to have been involved in the attack, has urged him to turn himself in. “We’re family, we’re thinking of him, we’re wondering where he is, whether he’s scared, is he eating,” Mohamed Abdeslam told French television station BFMTV. “The best outcome would be for him to turn himself in so that judicial processes can shed light on this story.”

The three people who attacked the French stadium are dead. One was Bilal Hadfi, 20, but two have not been identified. One of them was carrying a passport identifying him as Ahmad al-Mohammad from Syria, but French authorities believe the passport was stolen.

The three attackers of the Bataclan concert hall are also dead, after they opened fire inside a crowded concert and killed almost 90 people. One of the three has not been identified, and the other two were Ismaël Omar Mostefaï, 29, and Samy Amimour, 28. Both had previously been suspected of having terrorist connections.

Ibrahim Abdeslam, 31, the brother of Salah Abdeslam who is still at large, is dead after killing people who were eating outside of a restaurant. He had spent time in the same Brussels prison as Abaaoud, the alleged architect of the attacks. 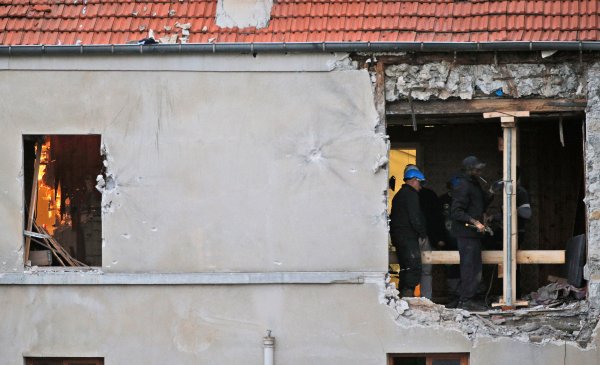