A nurse tends to recovering patients on a general ward at The Queen Elizabeth Hospital on March 16, 2010 in Birmingham, England.
Christopher Furlong—Getty Images
By John Patrick Pullen

The last time you visited the bathroom, you washed your hands, right? You don’t have to tell me—you know the answer. And soon, so might the cloud.

Microsoft and Gojo, the makers of Purell, teamed up to better understand whether sensor technology could help improve hand sanitization at hospitals. That’s important stuff: For medical professionals, having clean hands helps prevent the spread of infections at hospitals. A 2011 study of those infections by the Centers for Disease Control and Prevention counted more than 720,000 cases, ranging from pneumonia to bloodstream illnesses. That year alone, 75,000 patients died as a result of these highly preventable infections.

In a 2012 study, Gojo measured the rate of hand washing at John Peter Smith Hospital in Fort Worth, Texas by pairing traffic-monitoring activity counters with sensor-laden soap and sanitizer dispensers. These sensors were installed in medical, surgery, and infectious disease units throughout the hospital. The company later crunched the results via Microsoft Azure, the company’s cloud computing service. The results were revealed for the first time Wednesday at a Microsoft event in New York City.

At the beginning of the study, the system collected baseline figures over 10 days, tabulating a hand washing compliance rate of 16.5%. That’s the percentage of times that healthcare workers sanitized themselves versus how many opportunities they had to do so. Then, over the next 80 days, workers, patients, and even hospital visitors were informed of the study, in the hopes that people would consciously choose to scrub up as much as possible. Over that period, compliance rates jumped to 31.7%. Over the final 50 days, a post-study assessment tracked how much people cleaned up, even though they were no longer being reminded. It seems the lesson stuck, because the compliance rate wound up at 25.8%.

Even anonymized, this data was wildly valuable. The system was able to detect 90,000 hand washing opportunities, a number that human auditors would have a hard time matching. Applied across more hospitals, this could have a huge impact on sanitization in hospitals, potentially reducing the number of infections. But even just in this one instance, hand washing soared 92% during the study period. In human terms, that means fewer infections — and quite possibly some lives saved.

“All this talk you’re hearing about the Internet of Things and cloud computing, but what good is it really doing for us?” says Microsoft’s Barb Edson, general manager of data platform and Internet of Things. “Well, here’s a very tangible example of how it’s helping keep us healthy in one of the highest-risk communicable disease environments we encounter, and often when we’re at our most vulnerable—the hospital.”

Correction: The original version of this story incorrectly described the relationship between Gojo and Microsoft in conducting the study. Gojo conducted the study independently, then used Microsoft’s technology to process the results. 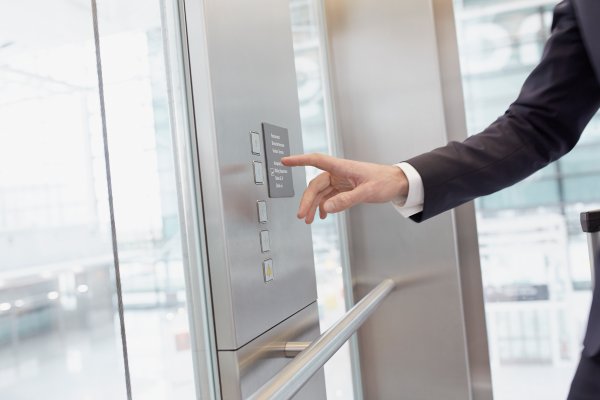 A Big Change Is Coming to Elevators, And It Matters More Than You Think
Next Up: Editor's Pick