9/11 was the first news event I can remember. I was nine years old and my family had just moved to the London suburbs. On that September evening fourteen years ago, we crowded around the television, watching footage of an airplane crash into the North Tower of the World Trade Center. I remember thinking: the pilot got lost. Then the second plane hit.

I had never heard of terrorism back then, but in the years to come, attacks would get closer to home. When I was 13, four suicide bombers set off explosives on London Underground trains and a bus and the hallways of my school filled with sobbing students and panicked teachers. I was 16 when militants gunned down hundreds of people in Mumbai – a city where many of my relatives live – and held the city on lockdown for days.

Yet while my friends and I may have grown up with the War on Terror, most of us were fortunate not to know anyone who died in any of the terrorist attacks. We weren’t old enough to know anyone fighting in Iraq or Afghanistan. We were the lucky ones: unlike so many people suffering through conflicts around the world, we felt safe in our homes and schools. We had never really found ourselves under assault.

That changed last Friday. Like the victims of ISIS’s brutal onslaught, I was out that evening eating and drinking with my friends in one of Paris’s many restaurants. After a year living in the city, I moved back to London in 2013 but the French capital remains my home away from home; in the past year, I have returned five times.

Just as terrorists targeted symbolic U.S. landmarks on 9/11, ISIS turned their guns on what makes Paris the most visited and beloved city in the world: its bars and cafés, its concerts, its unabashed embrace of joie de vivre. The 10th and 11th arrondissements that ISIS targeted were not the chic, touristy or especially wealthy parts of Paris. They were the diverse cosmopolitan quarters where the city’s young people drink and dance on weekends. Our rented apartment was less than a mile away from where gunmen sprayed bars and restaurants with bullets.

Speaking on Monday, French President François Hollande said the attackers targeted “youth in all its diversity.” The victims came from 19 countries. Most were French and most were young, many under 30. It could have been me, is the refrain on the streets here. French newspaper Liberation has anointed them “Generation Bataclan” – a young, open-minded demographic freshly traumatized by the attacks. “Tolerance was the target as much as France,” wrote Liberation’s editor Laurent Joffrin.

Parisians have exhibited quiet defiance as they have mourned the attacks, just as they did in January after the Charlie Hebdo massacre. But Friday’s violence was so indiscriminate that everyone feels more vulnerable than before. “This time, it feels like a matter of luck. The attacks were in areas we go to all the time,” says Lorette Hehn, a 24-year-old student at the Sorbonne. “Why wasn’t it me? There’s no logic. That’s how terror works.”

“I’m definitely looking for the exits now,” my friend James acknowledges. I feel the same way sitting in restaurants and bars by the canal, more shaken than I’d like to be. When a young man raps on the window of a café to say hello to his friend, we all jump.

Terror is all too familiar to young people in Iraq, Syria, Afghanistan and too many other countries. It’s why so many of them have fled for Europe in recent months and years. And for a new generation in Paris, 2015 was the year that violent terrorism became real, no longer just something to read about in newspapers but something right outside their doors.

But Generation Bataclan has displayed a quiet yet unshaking belief that the city will return to normal, that public anxiety will fade even if the attacks are a call to remain more vigilant. In peaceful protest, Parisians have returned to the city’s cafés and bars, sharing pictures with the hashtags #TousAuBistrot (#EveryoneToTheBar) and #JeSuisEnTerrasse (#IAmOnTheTerrace). Streets in Paris are covered in chalk messages of solidarity, encouraging each other to stay strong and united in the face of terror. The spirit of Paris cannot be broken, says one message. Paris will not give up, says another. “We cannot live in fear, we cannot stop going out,” says Simon Briefel, a law student in Paris. “The best way for all of us to fight terror is not to panic.”

So soon, like so many people in Paris, I will walk again along the city’s grand boulevards and twinkling bridges to meet friends and drink together as we have always done. The specter of trauma and death is no match for this city’s love of life. 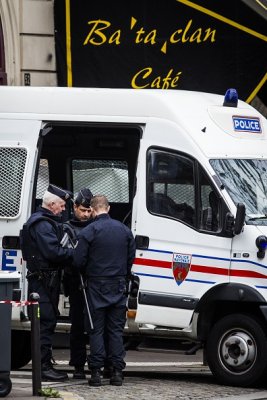 Here's What Will Keep Us Safe After Paris
Next Up: Editor's Pick