How the U.S. Can Exit a Permanent State of War in the Middle East

American militarists, a formidable contingent whose members remain stubbornly immune to learning, reduce the alternatives facing the U.S. in the wake of the Paris terrorist attacks to just two: armed escalation or abject passivity. You can guess which gets their vote.

The real world is a more complicated place than militarists are willing to admit. That complexity warns against indulging in either/or analysis where the only alternative to war is to retreat into the bunker. Indeed, complexity itself creates the possibility of alternatives. Yet identifying those alternatives requires first surveying the wreckage that the misapplication of U.S. military power throughout the Greater Middle East has produced over the past several decades.

For example, those promising that more forces in Iraq will defeat ISIS without risking adverse consequences seem to have forgotten similar predictions expressed back in 2003, on the eve of the Iraq War. Instead of solving problems, the U.S. invasion of Iraq fostered new ones, with ISIS one notable example.

Dating from 1980 when Jimmy Carter declared the Persian Gulf vital to U.S. national security, successive presidents have launched America’s armed forces on a seemingly endless series of interventions, large and small, throughout much the Islamic world. Evidence that these various exertions have contributed to peace and harmony or have won the U.S. respect and admiration is, to put it mildly, difficult to discern. Evidence that militarizing U.S. policy has exacerbated existing dysfunction is visible everywhere from North Africa to Central Asia.

The historical record speaks for itself: To prolong this misconceived enterprise any further is throw good money (not to mention lives) after bad. Demilitarizing U.S. policy in the Greater Middle East has therefore become an imperative.

It’s time for Washington to give up expectations that killing people we want killed, whether relying on air strikes or boots on the ground, will eventually alleviate the threat posed by violent Islamic radicalism. What can replace this strategy? Here’s one alternative that husbands instead of squanders American power, nudges others to shoulder responsibilities that are rightfully theirs, and takes a longer view of problems not amenable to quick fixes. Call it a strategy of containment tailored for the post-9/11 era.

1. Erect effective defenses. In an age of globalization, locking down the nation’s doors and windows necessitates concerted action not only in the physical world, but in the virtual one as well. It requires the careful monitoring of the people, goods and capital that endlessly circulate in and out of the country. It is primarily an intelligence and police, not a military, function.

2. Prompt regional powers with a shared interest in preserving the existing state system to do just that. ISIS seeks to dismantle that system, replacing it with a so-called caliphate. (Goodbye Saudi Arabia, Iraq, Iran, Turkey, Egypt and Israel.) Although disagreeing on a host of other matters, the leaders of these several nations by-and-large favor the preservation of existing borders. American diplomacy should encourage these “front line” states to make common cause against a common threat, not in the interests of world peace, but to avert the collapse of an imperfect but tolerable regional order. Together, they possess ample power to defeat ISIS.

3. Promote the forces of modernity that ultimately holds the best prospect of undermining retrograde Islamism. We’ve tried bombing, invasion and occupation. None have appreciably reduced the incidence of anti-Western sentiment prevalent in certain quarters of the Islamic world. We need to demonstrate that our way of life is not by definition antagonistic to Islam, thereby isolating and delegitimizing the alienated few. Over the long run, cultural and educational exchanges may well prove more effective than Hellfire missiles and SEAL Team Six. We should match the flood of Asian kids enrolled in American colleges and universities with a flood of Arab, Iranian and Pakistani kids.

Of course, implementing such a strategy implies subtlety and patience—not American strong suits. And, yes, the approach is not without near-term risk. And it offers little in terms of flag-waving, kick-butt satisfaction. But unlike everything else that we’ve tried thus far, it just might work.

Andrew J. Bacevich is professor emeritus of history and international relations at Boston University. His new book America’s War for the Greater Middle East: A Military History is due out in April 2016. 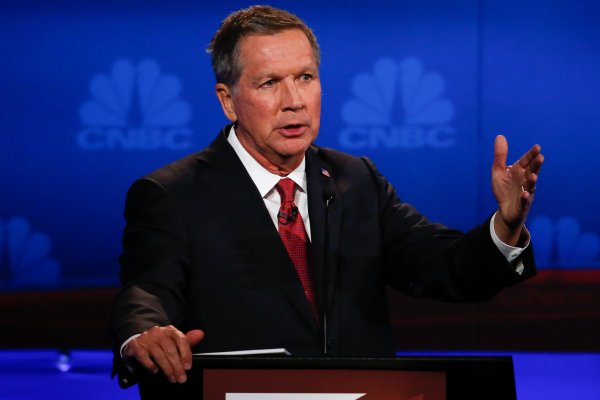 John Kasich: We Need Boots on the Ground to Defeat ISIS
Next Up: Editor's Pick