US Secretary of State John Kerry talks to the media after a meeting with French President Francois Hollande at the Elysee Presidential Palace on November 17, 2015 in Paris, France. John Kerry arrives in Paris to pay tribute to victims of last week's terrorist attacks.
Thierry Chesnot—Getty Images
By Daniel White

Secretary of State John Kerry said Tuesday that the “rationale” for the January attack on a French satirical magazine made more sense than the attacks in Paris last Friday.

During remarks at the U.S. Embassy in Paris, CBS News reports that Kerry said the Friday attacks, which killed 129, were not the same as the attack on Charlie Hebdo, which left 12 dead. “There’s something different about what happened from Charlie Hebdo, and I think everybody would feel that,” Kerry said. “There was a sort of particularized focus and perhaps even a legitimacy in terms of—not a legitimacy, but a rationale that you could attach yourself to somehow and say, ‘Okay, they’re really angry because of this and that,'” he continued. “This Friday was absolutely indiscriminate.”

Charlie Hebdo‘s often controversial cartoons have sometimes provoked anger among Muslims. The January shooting at the publication, claimed by al-Qaeda, were apparently motivated by illustrations of the prophet Muhammad. The recent Paris attacks were claimed by ISIS.

The publication has continued to poke fun at extremists, publishing a cartoon following Friday’s attacks of a Frenchman riddled with bullet holes. The caption read “They have guns…We have champagne.” 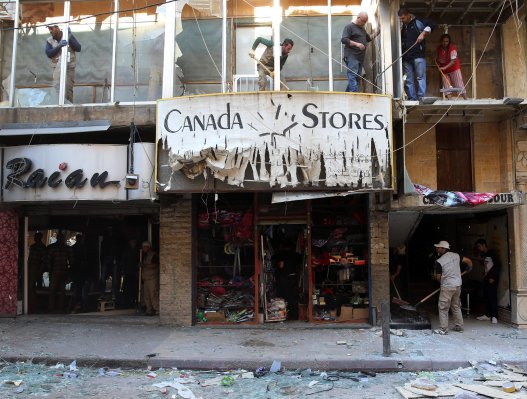 A Dysfunctional Lebanon Fears ISIS Will Strike Again
Next Up: Editor's Pick