France's Real Crisis Is About More Than Just Refugees

In the wake of the terrorist attacks in Paris that killed at least 132 people, many have said it’s time to close the door on the refugees coming out of Syria and Iraq. Over half the governors in the United States have said they won’t accept Syrian refugees, Eastern European nations are steeling their resolve against the plan to rehouse refugees proposed by German Chancellor Angela Merkel, and in France Marine Le Pen’s right-wing, isolationist National Front is looming large ahead of regional elections on Dec. 6—and the next French presidential election in 2017.

But this isn’t just about refugees. Yes, one of the attackers may have come from Syria via Greece. But six of the eight identified thus far are actually French citizens and most of them grew up in Europe. The problem is really about France’s ongoing cultural existential crisis. Ask most political scientists and they’ll tell you there are two kinds of nationalisms in the world: secular, as seen in the U.S., and religious, as seen in Israel or Iran. Truth be told, there’s a third, cultural nationalism as seen in Europe.

Not so in Europe. In the fall of 1989, three adolescent Muslim girls in the greater Parisian suburb of Creil were excited for their first day of high school. But all three were sent home because they were wearing head scarves, not burkas, simply scarves that cover their hair known in France as a foulard. Thus the Affaire du Foulard was born.

In France, the tradition of a Guerre Franco-Francais dates back to Emile Zola’s “J’accuse.” The idea of a French-French war means a national debate over a contentious issue. For Zola, that meant the right of the individual over the greater good. In many ways, the Affaire du Foulard took on many of the same arguments: was the education of a few Muslim girls worth more than the rights of the many? Unlike the Dreyfus Affair, in this case the rights of the many won.

To understand the vehemence with which the French reacted to these girls, you have to understand the sacred nature of schools in France. Children don’t just learn math and reading at school, they learn how to be French. France is, after all, a country that practiced “assimilation” colonization, where their subjects learned to speak and become French, which the government promoted as the highest culture on earth. The British, by way of comparison, practiced “integration” where subjects weren’t required to abandon their native cultures in favor of cricket, tea and scones—though some of that rubbed off any way.

“France is a diverse open minded society, but France also as a collective country has a dark history that they have to acknowledge. But not it’s really just about looking at the past, but facing up to the past in order to claim a common future. That’s still missing in France,” says Amel Boubekeur, a researcher on European Islamic issues at Grenoble University. “I believe that it is something that the U.K. has dealt with much more successfully than France, though it wasn’t the same experience—it was a less violent one. “

France utterly rejected the notion that being French included women covering their heads. Enshrined in its laws is the concept of laicité, or secularization. France moved to protect its culture and in the years since has, for the most part, banned Muslim girls from wearing headscarves to school. To level the playing field, they also banned Christian and Jewish symbols, including yarmulkes. Almost every year since there have been French-Muslim protests to allow their girls to wear foulards to school. The protests ebbed and flowed with the news: after the invasion of Iraq they found new life and have only grown since.

But this enforced secularism isn’t unique to France. In 2009, Antwerp in Belgium moved to ban foulards in schools, a move that spread across Belgium, though not uniformly. At the same time, a new Islamist group, Sharia4Belgium, flourished by opposing the prohibitions on head scarves in the name of religious and civil liberties. The ban “was a major rally point for organizations like Sharia4Belgium,” says Guy Van Vlierden, editor of a blog on Belgian foreign fighters. “A lot of spontaneous action started for that. That has driven a lot of young people into the arms of terrorism, that’s very clear.”

Sharia4Belgium, like many French extremist recruiters and imams, preyed on the immigrants’ sense of not belonging—of unsuccessful assimilation—even when those immigrants were second or third generation. It was the sense of being robbed of their “roots” that set the Kouachi brothers down their destructive path toward Al-Qaeda, that would prove fatal for the employees of Charlie Hebdo.

Europe is a society still grappling with its minority groups, even thousands of years later; just look at the Catalonian and Scottish pushes for independence. It’s also a continent of ancient, beautiful cultures that are fighting to survive within the bigger entity of the European Union; many of the things that make a nation a nation have been subsumed: currency, borders, even to some degree, military action. One means of resistance for France is to protect, at all costs, what makes French people French at a time when its cultural traditions seem under threat — both from the top, with the economic necessity of the European Union, and from the bottom, with the waves of immigrants, and the foulards in the schools. In an increasingly existential crisis, France is attempting to assimilate by force: no foulards, expel radical imams, speak French not Arabic, learn the Marseillaise. But the more they win, the more they lose.

“There has to be some nurturing otherwise people feel like second class citizens, when they’re only invited to speak out against terrorism but say nothing else,” says Boubekeur. “They will say: ‘I have other opinions, other voices and I have the right to express opinions that aren’t loyal to France if I want to do so.’ When you can’t speak to the mainstream, you withdraw from the mainstream.” Culture wars have no winners.

Correction: The original version of this article misstated the year three girls were sent home for wearing a foulard. It was 1989. 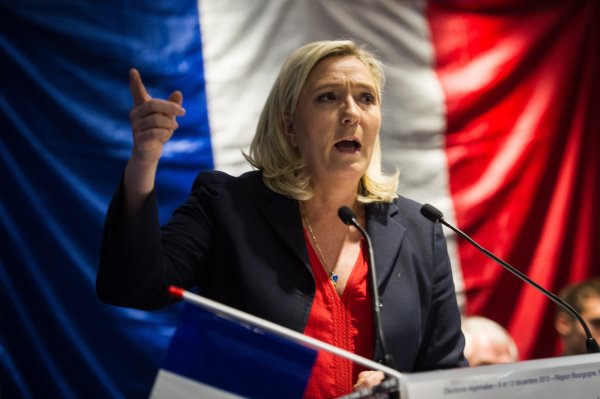